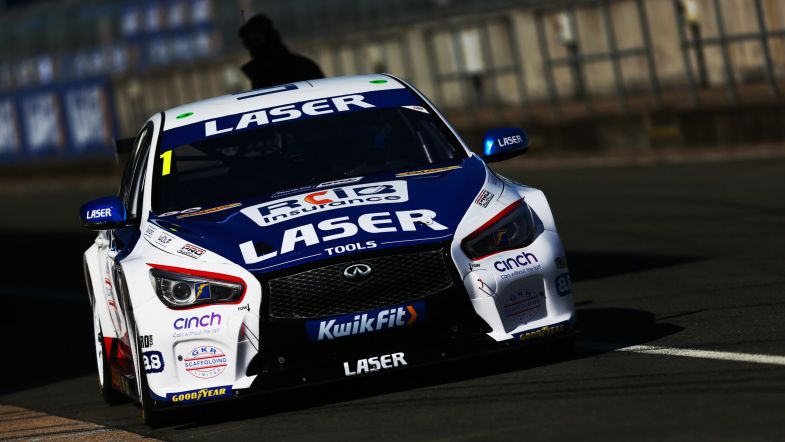 In tricky wet conditions after overnight rain was followed by more showers at the high-speed Hampshire circuit, Sutton would emerge as the man to beat at the wheel of his Laser Tools Racing Infiniti – posting a quickest lap of 1:20.041s.

That allowed the defending champion to edge Josh Cook out of top spot as the BTC Racing man enjoyed a strong start to the weekend at his home circuit, and one where he has gone well in the past.

Cook would end up just 0.049s behind, with the pair holding an advantage of half a second over Jake Hill as he slotted into third sport in his MB Motorsport Ford Focus.

Gordon Shedden – fastest during the season launch test – was fourth quickest for Team Dynamics, with the top ten completed by another returnee Jason Plato, and Aiden Moffat in the second of the three Infinitis on the grid this season.

Rory Butcher was seventh best in his Speedworks Toyota from Tom Oliphant in the leading BMW 330i M Sport. Despite the last minute nature of his call up for the weekend, Dan Cammish took ninth, with Dan Rowbottom rounding out the top ten.

Elsewhere, Tom Ingram was eleventh in the leading Hyundai with Glynn Geddie the quickest of the four new CUPRA Leons in 18th.

Tom Chilton was unable to set a lap time due to a clutch issue on his Ciceley-run BMW.