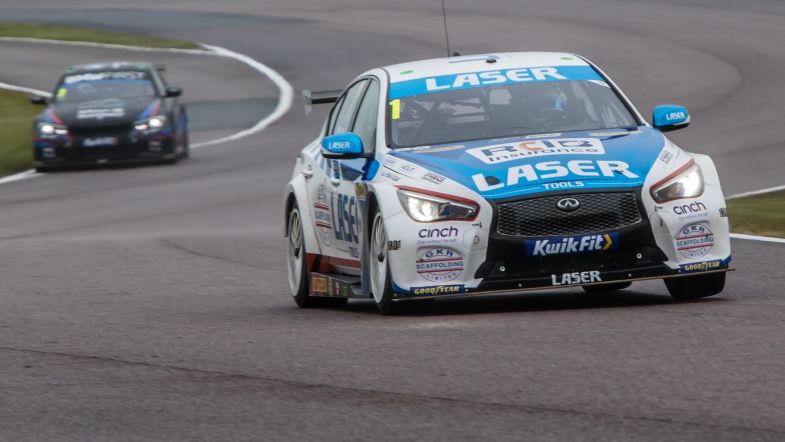 Ash Sutton: “It was all about nursing it round”

Ash Sutton insisted that “nursing a car that wanted to kill me” had been key to him securing the first pole position of the BTCC season at Thruxton.

Sutton had topped the times in free practice at the wheel of his Infiniti Q50 having set the fastest time in FP1 and was the early pace setter in qualifying in continuing to wet conditions.

However, as a dry line started to appear on track, a number of rivals switched to slick tyres, leaving the Laser Tools Racing man to follow suit.

It would prove to be the right call as times tumbled late on, with Sutton saving his best until last as he secured the first pole of the new campaign, setting him up in the ideal position to start the defence of his title.

“That wasn’t an easy session,” he said. “I was pleased to top the times in the wet early but when I heard people were going to slicks – and particularly the Hondas – I knew we had to change.

“Luckily we got the tyre temp up enough and we were there at the end, but there was around twelve minutes to go when we switched to slicks and it was only on the last two laps that we got enough heat in them.

“I had to nurse a car round that wanted to kill me and it was a bit sketchy at times, but then the tyre came in and away we went. I knew S1 was strong and then it was all about keeping it clean in S2 and not making a mistake at the chicane.

“We just kept it cool and that was good enough.”