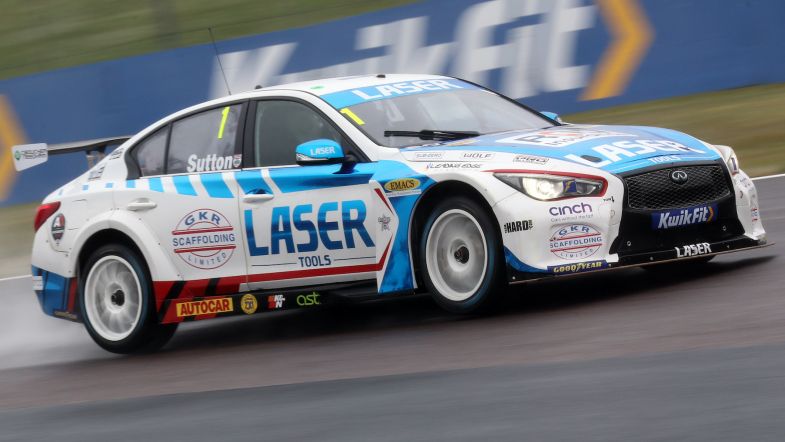 Ash Sutton snared the first pole of the 2021 BTCC season after a dramatic drying session at Thruxton.

Although conditions started with all drivers on wet rubber as light rain continued to fall across the circuit, it became clear towards the final ten minutes that the time was arriving to switch onto dry tyres.

What that meant was that the session effectively came down to who could get heat into the their tyres quick enough to be able to perform when it really mattered.

It looked like that man could be Speedworks driver Rory Butcher as he put his Toyota onto provisional pole as the clock ticked down towards zero, but there were a number of drivers behind still on quick laps.

Jake Hill was one who looked racy in his MB Motorsport Focus but his hopes of pole were ended when he came across the Vauxhall of Jason Plato at just the wrong moment heading through the final chicane and missed his chance to get ahead.

Instead it was Tom Ingram in the EXCELR8 Hyundai who moved ahead but that didn’t last for long as Sutton went four-tenths of a second quicker to take what would prove to be pole. Josh Cook pushed Sutton close but had to settle for second spot, 0.053s down, with Colin Turkington overcoming back pain to jump up into third in his BMW.

Ingram had to settle for fourth ahead of Butcher, with Tom Oliphant rounding out the top six.

Hill was left to wonder what might have been in seventh ahead of Gordon Shedden in the leading Dynamics Honda, with the top ten completed by Ollie Jackson and Chris Smiley.

The session passed without major dramas aside from an off for Jade Edwards just after she had switched to slicks, although she was still able to qualify well inside the pack in 17th spot.

Glynn Geddie’s CUPRA was late on track as Team HARD completed repairs, and he secured the 27th best time.