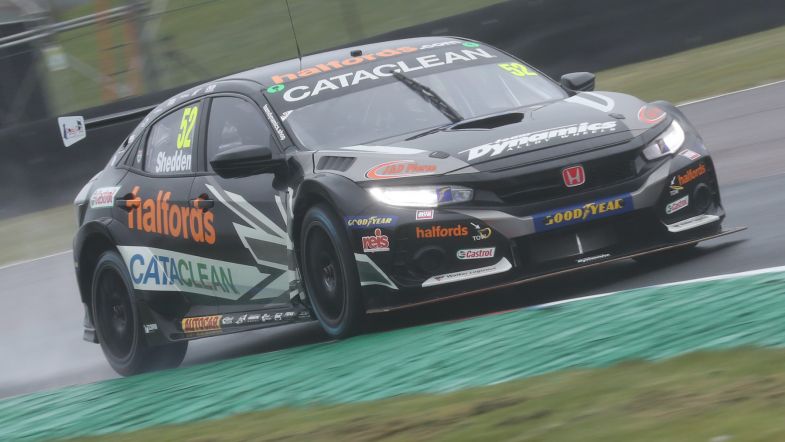 Returning triple champion Gordon Shedden hit the front in the second free practice session of the weekend at Thruxton ahead of the opening rounds of the British Touring Car Championship season.

The Team Dynamics driver was unable to match the pace set by Ash Sutton earlier in the day as wet weather conditions continued to impact the on-track action, although the session did conclude with the majority of the field venturing out on slick tyres to explore the grip available around the quickest venue on the schedule and also to scrub tyres for later use.

Shedden’s benchmark time of 1:20.994s saw him end up two-tenths of a second clear of Sutton’s Infiniti Q50, with Dan Rowbottom in the second of the Team Dynamics cars only a fraction of a second further back in third spot. Dan Cammish was again right on the pace ahead of his one-off outing with BTC Racing; slotting into fourth spot as the FK8 Hondas continued to run towards the front.

Tom Oliphant was again the leading BMW driver in fifth spot ahead of Jason Plato, with Tom Ingram getting the Hyundai up into the top ten for the first time this weekend in seventh. Aiden Moffat, Josh Cook and Adam Morgan rounded out the top ten.

Expected front-runners Jake Hill and Rory Butcher were just outside the top ten, with Colin Turkington down in 19th spot having not chased a quick time in his BMW.

Having been unable to set a time in FP1, Tom Chilton managed 23rd, whilst Glynn Geddie’s CUPRA failed to appear on track as Team HARD continued repairs after an off in the earlier session.