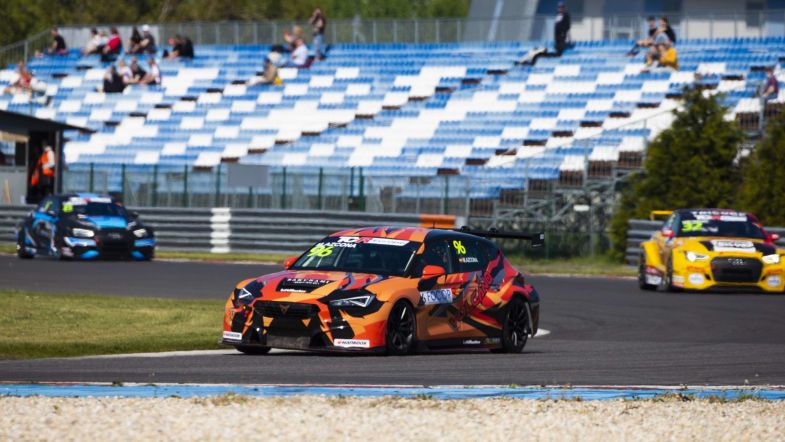 Volcano Motorsport’s Mikel Azcona began the 2021 TCR Europe season in the best possible fashion with a routine victory in Race 1 at the Slovakiring.

The Cupra León Competición driver started second on the grid but catapulted off the line to lead every lap of the ten-lap encounter.

Off the start, it was Azcona who got the best start and the Cupra had the measure of pole sitter Tom Coronel to seize the lead into the first corner.

Coronel valiantly fended off an attack around the outside from Comtoyou Racing team-mate Baert to keep second place, but the Dutchman lost pace and places by the halfway mark as the Zengo Motorsport Cupra of Dániel Nagy and the Sébastien Loeb Racing Hyundai Elantra of compatriot Niels Langeveld both found a way past.

As those behind fought for position, Azcona quickly established a comfortable 1.894 second margin by the end of the opening lap.

Despite his superior pace in the opening laps, Baert only managed to get past Coronel on the four lap of 10, with a routine move down the inside of Turn 1.

Baert held similar pace to leader Azcona, but such was the latter’s early break that the Audi RS 3 LMS could not seriously challenge Azcona for victory honours by the end.

The star of the race was undoubtedly Langeveld, who was left disappointed with his Q1 exit in qualifying, with the SLR Hyundai driver making great progress through the field to finish an impressive fourth in the Elantra’s first outing.

Langeveld had challenged the Cupra of Nagy for the final place on the podium after making his way around Coronel at mid-distance but couldn’t quite find the opportunity to make a pass on the Hungarian.

For Coronel, it was a case of missed opportunity as he could only manage fifth at the flag after starting from pole. The Dutchman had slipped behind the Brutal Fish Racing Honda Civic Type-R of Isidro Callejas as well, but profited from a wild off-road moment for the Spaniard at the exit of Turn 2 to move back into the top five.

Callejas’s moment was huge, as his Honda bounced over a prominent bump on the grass which ultimately broke the left-rear suspension of the car two laps from the end, costing the newcomer a likely sixth-place finish.

Inheriting that position was Dušan Borković, who recovered superbly after a poor start which dropped the Comtoyou Racing Audi driver down to 10th from fourth on the grid. He ended up seventh behind the second SLR Elantra of Mehdi Bennani.

Borković’s team-mate Sami Taoufik produced a mesmerising drive from 19th on the grid to finish eighth, ahead of Felice Jelmini and Evgenii Leonov.

There was yet more disappointment for VRC Team’s Mat’o Homola who failed to start due to mechanical issues. The local driver experienced power steering problems in qualifying and was unable to make it out of the pits to the grid.

It was a similar story for the pair Team Clairet Sport Peugeot 308TCRs of Jimmy and Teddy Clairet, who also failed to finish.

Teddy suffered a spin in qualifying and started from the back of the grid, and lasted just three laps, while Jimmy was forced out after a solitary lap.