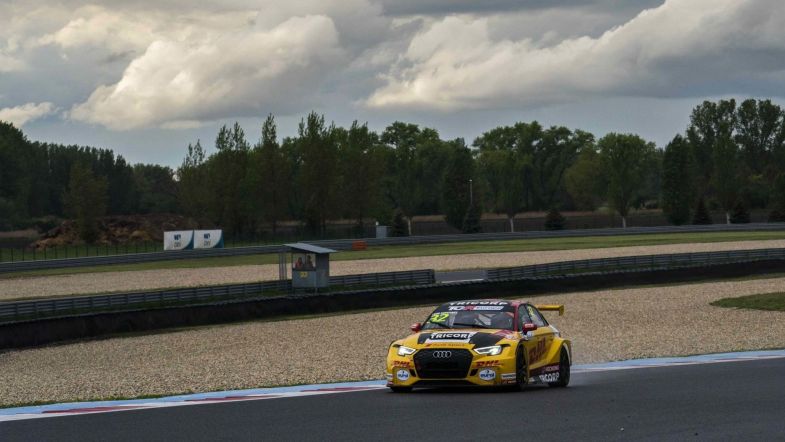 Tom Coronel backed up his Friday practice pace to claim the first pole position of the TCR Europe series season following a closely fought qualifying session at the Slovakiaring.

The Comtoyou Racing Audi RS 3 LMS driver set a time of 2:10.344 to end up just over a tenth of a second quicker than the Volcano Motorsport Cupra León Competición of Mikel Azcona, while Coronel’s team-mate Nicolas Baert was just six-hundredths of a second further back in third.

With points awarded to the top ten in qualifying, Coronel has taken the early series lead on 10 points, one ahead of Azcona and two ahead of Baert.

Reversed grid race two pole went to reigning TCR Europe champion Mehdi Bennani, who was tenth quickest in qualifying. The Moroccan will be joined on the front-row by Sébastien Loeb Racing team-mate Felice Jelmini, making it a Hyundai Elantra lock-out.

With rain affecting Friday’s second practice session, many of the drivers took to the circuit at the start of the the opening segment of qualifying, which took place under clear skies but a relatively cool track temperature of just 11 degrees.

Coronel was the first driver to set a representative lap-time with a 2:11.219 and this was the only proper time in the first half of the session following a red flag for Teddy Clairet, who spun his Team Clairet Sport Peugeot 308TCR into the gravel.

A short delay followed and the session restarted with just under seven minutes left on the clock, meaning a mad rush for all but a few of the 22-car field.

Borković initially topped the times after the restart but he was almost immediately beaten by FP1 pacesetter Azcona by over two-tenths of a second.

Azcona held onto the fastest time until the end of the 20 minute segment, despite a late effort from Coronel which catapulted the Dutchman to within eight-hundredths of a second adrift of the Volcano Motorsport Cupra.

Of those to miss out on a place in Q2 was the Sébastien Loeb Racing Hyundai Elantra of Niels Langeveld, who fell agonisingly short of the required top 12 position by just seven-hundredths behind team-mate Jelmini.

“In my last run, I was just a little bit too careful in the first corner, and the longer the stint the more understeer I got during the session,” Langeveld said.

“The first one was the best and then the red flag came out, so for sure that would have been enough. P13 is quite disappointing but we’re still in a learning process with the car, getting step by step better.”

Teddy Clairet, after causing the red flag stoppage, will start both races from the back of the grid after his times were disallowed.

Despite making it through to Q2, Homola again spent the start of the session in the pits, with his Janík Motorsport mechanics inspecting the underside of the Hyundai i30 N TCR. The problem proved too difficult to remedy and Homola was out of qualifying and will start 12th in both of the weekend’s races.

Borković then posted a time of 2:10.720, which was some 0.240s faster than Baert’s Audi RS 3 LMS, with Nagy just a further tenth-and-a-half further adrift.

Azcona then improved to set a 2:10.664, five-hundredths quicker than Borković but was soon beaten again by Baert who went just under a tenth faster still.

Coronel, who admitted that his onboard lap-timer wasn’t working during the session, went out again after his rivals and set his fastest time of 2:10.344, which turned out to be unbeatable, despite Azcona’s late effort which was only good enough for second.

Dániel Nagy starts fifth on his return to Cupra power, ahead of the best Honda Civic Type-R of PSS Racing’s Franco Girolami.

VRC-Team’s Klim Gavrilov was the last driver to finish within a second of Coronel’s time in seventh, ahead of the Brutal Fish Racing Honda Civic Type-R of Isidro Callejas.

After a low-key practice day on Friday, two Sébastien Loeb Racing Hyundai Elantras made it into the top 10, with Jelmini ninth fastest ahead of team-mate and Race 2 pole sitter Bennani.

Race 1 at the Slovakiaring is scheduled to take place later on today at 15:15 CET.