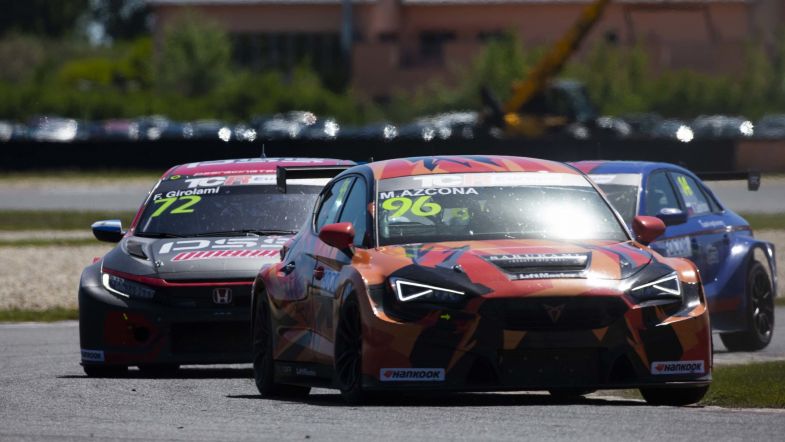 Volcano Motorsport’s Mikel Azcona leaves the opening round of the TCR Europe series season at the Slovakiaring with a healthy points advantage over last year’s champion Mehdi Bennani after a near-perfect weekend.

The Spaniard, driving the latest version of the Cupra León Competición, started the weekend on the right foot by topping the opening free practice session before effectively sitting the rain-affected second session.

Come qualifying, Azcona contented himself to the outside of the front-row as Tom Coronel claimed pole position but, ever the wily touring car driver, Azcona wasn’t concerned.

“I am happy to be behind him because P2 is a really good position,” Azcona said post-qualifying on Saturday.

“The difference between us is under two tenths but in the race that doesn’t matter. I feel okay for the race this afternoon so let’s see how it goes.”

Despite being on what was considered the “dirty” side of the track at the start of race one, Azcona got the better traction off the line as Coronel slipped back. With clear air, Azcona simply drove away from the rest of the field, en route to a dominant victory, his fourth in the last five TCR Europe races.

Azcona excelled in race two starting from ninth, and he quickly made his way up the order to challenge the back of the podium inside the opening half. Having dispatched Klim Gavrilov’s Audi RS 3 LMS and Franco Girolami’s PSS Racing Honda Civic Type-R TCR, Azcona valiantly fought Bennani for the lead but had to settle for second.

“I feel really good with P2; I started from P9 with many cars in front of me,” continued Azcona.

“At the beginning of the race I didn’t know what was going on in the first corner. I decided to go on the outside line because I had a clear line and there were too many cars on the inside, plus I had Dušan Borkovič on my right and I decided to give him some room.

“After that I could concentrate on my race; Mehdi drove really well and so I’m happy with P2.”

Azcona sits pretty at the top of the standings on 84, with Bennani 22 points in arrears on 62. Zengo Motorsport’s Dániel Nagy is two points further back on 60 in third place, while just five points covering the remainder of the top five with Comtoyou Racing’s Nicolas Baert and Tom Coronel on 58 and 55 points respectively.

Thanks to its drivers’ points hauls, Comtoyou Racing leads the teams’ standings on 113 points, with Volcano Motorsport nine points back on 104.