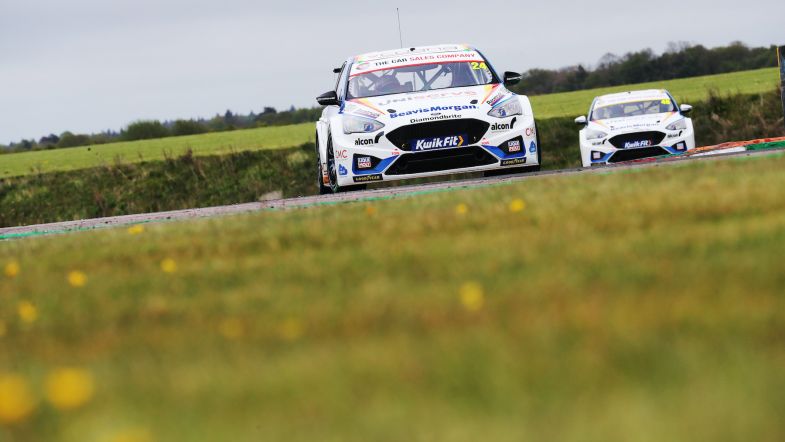 Jake Hill admitted that he was surprised to come away from the opening weekend of the BTCC season as championship leader on the back of an impressive showing on track at Thruxton.

The MB Motorsport driver had been left with work to do after qualifying in seventh spot after being baulked on his final flying lap of the session but recovered well to grab a podium finish in the opening race as he took third behind Josh Cook and Tom Ingram.

Hill then repeated the result in race two and went into race three running on slick tyres despite the arrival of rain just before the start.

Although that meant he dropped down to 20th spot in the early stages, Hill started to charge back through the field as the conditions turned towards the slick shod cars and moved into the lead just as rain started to fall once again.

Pushing hard to keep his car on track, Hill lost out to Ash Sutton and Jason Plato but another third place finish gives him the early championship lead.

“It’s crazy and I didn’t expect it,” he said. “We’ve had a fantastic weekend, and the car has been great. The first two races were mega and I’ll admit that in race three, I wondered if we’d made the wrong call with the tyres at first. It turned out we hadn’t and the race came to us; it’s just a shame that Ash and Jason got by at the end.

“Towards the end of race three when the rain returned it was all about having big balls as you had to commit and push hard to keep the heat in the tyres. It was a case of letting the car dance and try to kill you, and drag the result from it.

“I can’t believe we’re leading but we’ve been so strong this weekend and haven’t put a foot wrong. Credit has to go to the whole team.”