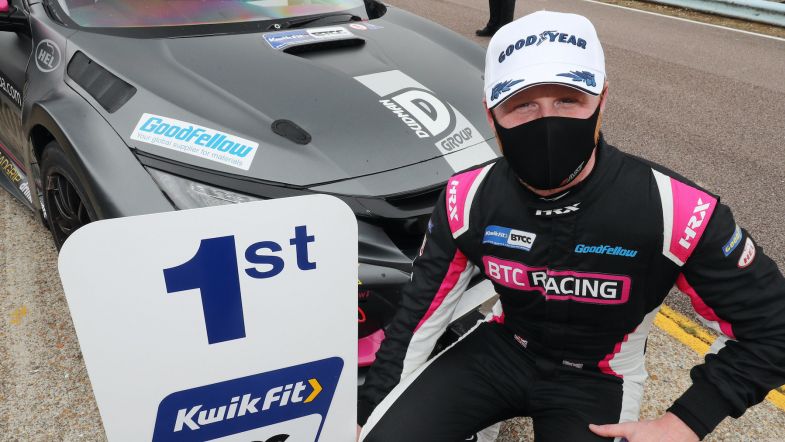 Josh Cook wrapped up a second win of the weekend at Thruxton to extend his early lead in the British Touring Car Championship in a race that featured two large accidents elsewhere on the grid.

Cook managed to hold the lead when the lights went out despite the additional weight on his car, but the race was quickly halted after a huge accident at turn one involving Jade Edwards, Glynn Geddie and Andy Neate.

Going into the fast right-hander, Neate tagged the rear of Geddie’s CUPRA and sent it into a spin, with the innocent Edwards being collected as all three cars headed off into the tyres at speed. Geddie’s car would go into the barriers backwards before riding up over the bonnet of Edwards’ Honda, eventually coming to rest upside down.

All three drivers were able to escape unscathed, although the same couldn’t be said for the cars – all of which were returned to the paddock carrying extensive damage.

After a lengthy delay to the allow the recovery of the cars and repairs to the tyre barriers, the race resumed over a shortened twelve lap distance, with Cook again holding the lead from Ingram when the race kicked off.

Ingram tried to make a move at Campbell but ran wide and lost momentum, which allowed Dan Cammish to get ahead into second – with Ingram then going three-wide with Rory Butcher and Jake Hill through Noble.

There, the rear of Butcher’s Toyota suddenly stepped out and the Scot speared off sideways into the tyres at Goodwood at unabated speed. The car was once again left extensively damaged, with the Scot able to climb out unaided, and the safety car introduced.

The field circulated behind the safety car with Cook leading Cammish and Hill, with Jason Plato up into fourth after getting ahead of Ingram before the caution was called. Ash Sutton held sixth, but would then pit behind the safety car and dropped to the rear of the field – joining Adam Morgan who had gone off on lap one and run across the grass going up Woodham Hill, leading to an unscheduled pitstop.

The action resumed on lap six, with Cook retaining the lead from Cammish and Hill, with the top three breaking away from Plato and Ingram behind. Ingram then came under pressure from Rowbottom, with the Honda getting fifth on the run up Woodham Hill.

As in race one, Sutton found himself trying to fight back up the order and by the end of lap nine, he had got himself back into the points on lap nine and was rapidly closing in on the top ten.

With the top three breaking away, Plato was holding on to fourth despite the best efforts of Rowbottom, but the Team Dynamics man made a move stick at the end of lap ten when he forced Plato into an error at Club and then got ahead on the run across the line – quickly pulling away from the Vauxhall.

Sutton’s charge continued as he rose into the top ten by the end of lap 13 and on the final lap, he swept ahead of Oliphant at Goodwood to secure what would be an impressive ninth spot.

Out front however, Cook was untroubled despite the extra ballast on his car as he secured his sixth win at Thruxton, with Cammish following him in second to maintain his own impressive record at the Hampshire circuit, Third for Jake Hill gave him a second podium of the weekend.

Rowbottom’s fourth place bettered his previous best from earlier in the day despite Plato closing back in towards the end, with Ingram keeping Colin Turkington at bay throughout to secure sixth spot. Aiden Moffat took eighth behind Turkington.

Outside the top ten, there were no points for Gordon Shedden after his race one DNF, with contact with Adam Morgan on the final lap not helping his cause.