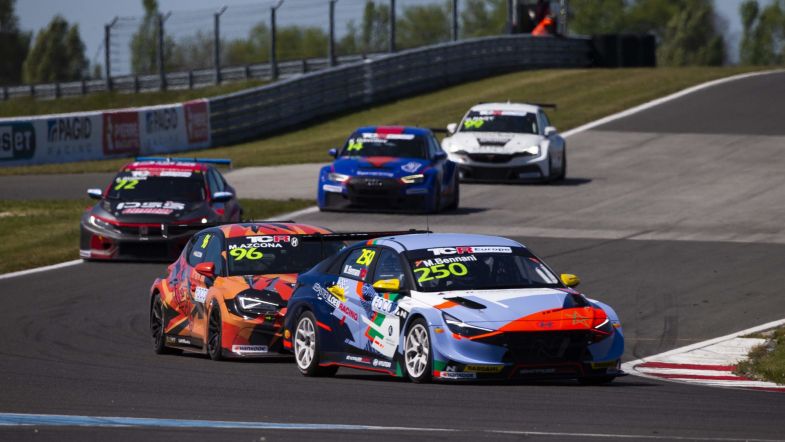 Sébastien Loeb Racing’s Mehdi Bennani says that he was driving to his limit to fend off Mikel Azcona to claim his maiden TCR Europe Series victory in race two at the Slovakiaring.

The defending series champion, who secured the title last year without winning a race, started the reversed-grid second race of the weekend from pole position and withstood a ferocious attack from Volcano Motorsport Cupra driver Azcona in the latter stages.

The Moroccan narrowly held on to claim the win by just over half a second, giving the new-for-2021 Hyundai Elantra its first win after a low-key start to the meeting.

“It’s really nice to be back on the top step of the podium, particularly on the first outing of the car as it’s brand new,” said Bennani.

“It wasn’t easy, as we still had to manage the set-up of the car so we were improving a lot between FP1, FP1 and qualifying.

“Many thanks to the team and to all four drivers that they were working all the time to give the best data to improve the car.

Although Bennani led from start to finish, Azcona’s Cupra León Competición was the faster car by the end of the race and the Spaniard was all over the back of the Hyundai at the start of the final lap.

Azcona feinted to the inside of Turn 1 in an attempt to slide his car past Bennani’s, but the latter defended well during a race he labelled as “full risk”.

“At the end, we had really good pace; I could see that Azcona was quicker in some parts and I was slightly better in other parts,” Bennani added.

“I was full risk, 100% in some parts and sometimes I had a lot of oversteer but that’s racing. I wanted this result for Hyundai because they choose me to be with them to help develop the car. We did it and I’m so happy for them.”

With the victory, Bennani now lies second in the points standings, 22 points behind Azcona ahead of the second round at Paul Ricard in three weeks time.