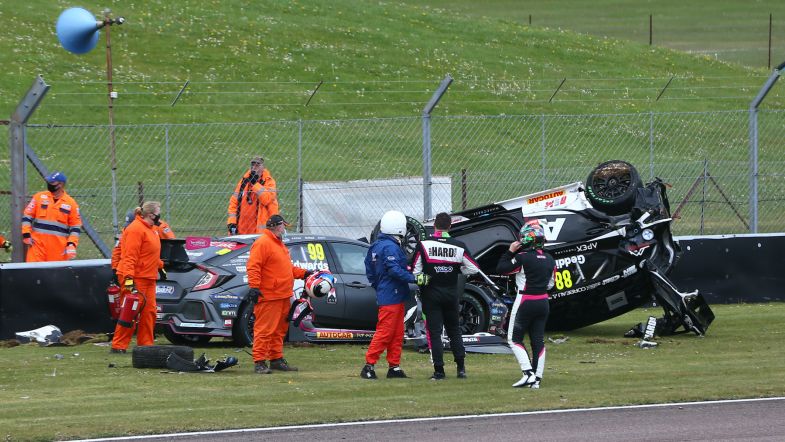 Team boss Tony Gilham admitted it had been a “rollercoaster weekend” for Team HARD as it introduced the new CUPRA Leon into the BTCC for the first time.

Four of the new cars would appear on track for the season opener at Thruxton but a tough start to proceedings saw Glynn Geddie go off in FP1, with his car then missing the second practice as it underwent repairs prior to qualifying.

Race day would provide the team with five points finishes – including a best of eighth for Jack Goff in the mixed weather third race – but Geddie’s car would be left with extensive damage after being caught up in the incident in race two with Andy Neate and Jade Edwards.

It leaves the team with a busy few weeks ahead of the next round at Snetterton to carry out repairs to the #88 car.

“It’s frustrating as it was a huge weekend for us with the new CUPRA, and whilst we are going home with three that are still relatively brand new, we have one that looks very, very used,” he said, “especially when it wasn’t even our accident to have in the first place.

“I feel for Glynn because he had a tough start to the weekend and we were just looking to try and improve all the time as we hadn’t run the car in the wet before or on the hard tyre; it was a learning process.

“We had such a busy winter building five news cars – having helped with the build of Aiden Moffat’s new Infiniti – so it has been a monster effort, and fair play to the team for getting it done. We were looking forward to a few weeks where we could take the foot off the peddle a little, but it looks like we’ll now need to ramp things up again…”

A top ten finish first time out for the car came on the back of Goff being in the mix towards the front during the season launch test, and Gilham said he felt it was mission accomplished on that score from the opening three rounds.

“We were realistic coming into this weekend,” he said. “The pace at media day was genuine, but we had only tested on the medium tyre so we had an understanding there with the car. This weekend we improved our pace on the wet tyre and we got close on the hard tyre, and we wanted to try and push towards the top ten against really healthy competition.

“I think we can be pleased with the progress made.”