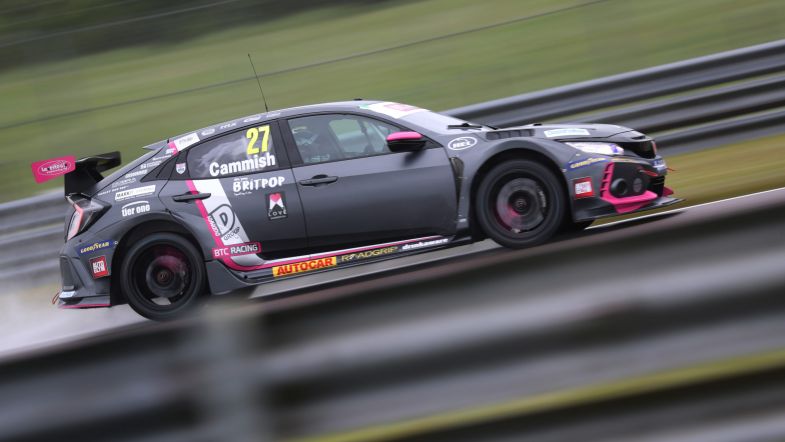 Dan Cammish said he was delighted to secure a podium finish from his one-off return to the BTCC with BTC Racing at Thruxton.

Having lost his drive with Team Dynamics, Cammish will return to the Porsche Carrera Cup GB this year but was called up at the last minute by BTC after it parted company with Michael Crees following the season launch at Silverstone.

Qualifying in twelfth spot on the grid having not managed to get the most out of his slick tyre run, Cammish made the most the of the fact that the FK8 Honda Civic is one of the strongest cars around Thruxton to come through to fifth in race one, later being promoted into fourth after a penalty for Colin Turkington.

The former series runner-up then improved on that in race two as he quickly fought his way up into second spot, and then ran behind team-mate Josh Cook to the finish to give the team a one-two finish.

Although he would fail to score in race three after pitting for a change of tyres in the mixed weather conditions, Cammish ended the weekend sitting fifth in the standings prior to his return to the Porsche grid next time out at Snetterton.

Who will replace him in the Honda has yet to be confirmed.

“It was a really good weekend,” Cammish said. “Qualifying didn’t go to plan, but we had lots of speed which we showed in races one and two. Coming through to fourth and second was a fantastic result for BTC Racing and I am proud to have played my part in that.

“Josh has had such a great weekend to win two races and he’s had great pace all weekend as well, so he thoroughly deserved those results. Race two, perhaps if it was another driver, I might have had more of a go, but I was happy to play the team game and that is sometimes what you have to do.

“Race three…it was wet, it was dry, it was wet…every time we made a call it went back to front! It was a shame to end like that, but it doesn’t dampen what we’ve achieved. BTC Racing got team of the weekend and we’ve had a great day. There are lots of teams around us who’ve had a worse afternoon and I am fifth in a championship I’m not competing in, so it can’t be too bad!”