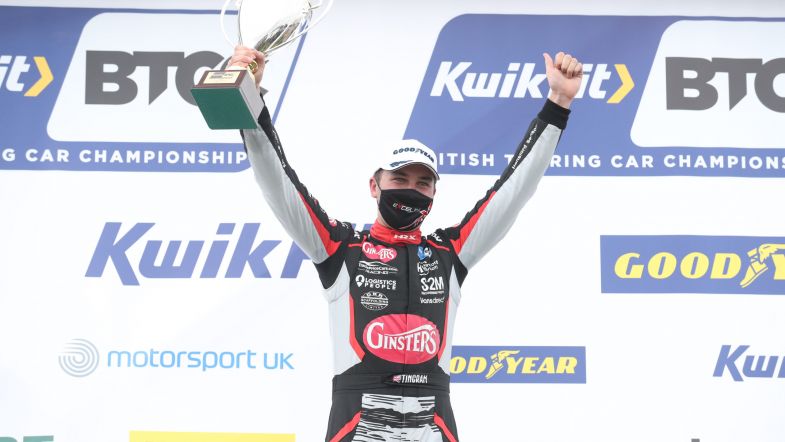 Tom Ingram insisted that a podium finish on his debut with the EXCELR8 with TradePriceCars.com team was “a fantastic job” as the new BTCC season kicked off at Thruxton.

Having switched to the Hyundai team over the winter, Ingram went into the opening round looking to impress and came close to scoring pole in the mixed weather conditions that affected qualifying on Saturday afternoon.

From the second row of the grid, Ingram quickly got himself up into second spot in the opening race behind Josh Cook, and would shadow the Honda driver in the early stages before settling for second spot; a result that the matched the best yet for the team.

Sixth in race two with additional weight would follow, although a penalty for not having his tyres fitted by the allowed time meant he then failed to score in the final race of the weekend.

Ingram however was still happy with how things had panned out.

“I think we’ve shown we’re going to be at the front this year,” he said. “With no weight on-board, the car is clearly there; with the weight in, we’ve got a bit of work still to do, but on the whole, we’re in the mix, and that’s really encouraging.

“We have turned up at a circuit where we haven’t been with the car before and qualified fourth, stuck it on the podium and then added another top six finish so we can pleased, even with what happened in race three.

“We learnt a huge amount over the weekend and as a team and the important thing to take away is that we know why the Hyundai reacted the way it did in each race and we will go away and figure out what we need to do to improve it. I think we can all be very proud of ourselves and looking forward, I’m really excited.”

Team-mate Chris Smiley however would endure a more troubled weekend in the sister Ginsters-backed car, with an incident with Gordon Shedden in race one putting him into retirement and then a sensor glitch ruling him out of race two.

The Northern Irishman would salvage 15th in race three to at least get his first points of the year on the board.

“The results don’t tell the full story this weekend,” he said. “In race one I was wiped out through no fault of my own and then in race two, I’d got up from 28th toward the points but we had a small fault with an engine temperature sensor which showed the engine was overheating when it wasn’t.

“In race three, I think we made a good call with the tyre and we were up into the top ten from the back but then the rain returned at the end. We managed to grab a point and whilst it is frustrating not to get more, there are a lot of positives to take away as we aren’t a million miles away pace wise.

“The team did a great job to repair the damage to the car for race three and they didn’t really get rewarded for their effort. Everyone has a bad weekend during the season; hopefully I’ve just got rid of mine early!”