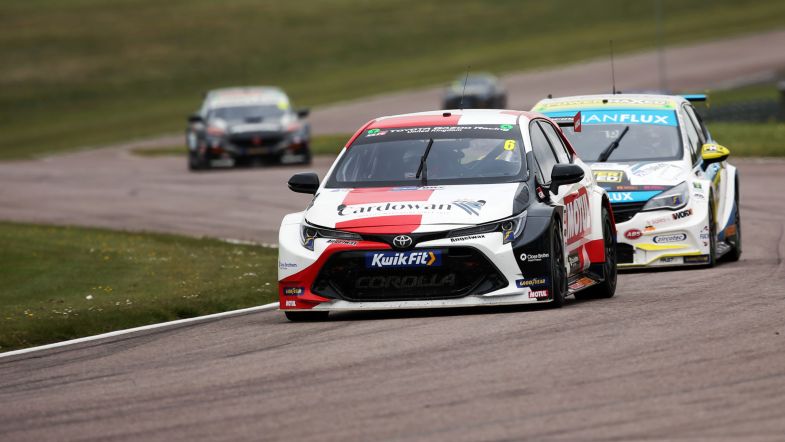 Rory Butcher insisted there were positives to take away from the BTCC season opener, despite a tough first weekend with Speedworks at Thruxton.

Butcher’s weekend had started well after his put his Corolla fifth on the grid in qualifying in mixed weather conditions on Saturday afternoon.

The Scot was able to repeat that result in the opening race on a now dry track, keeping out of trouble in the early stages to pick up a first top six result with his new car.

However, that would prove to be the highlight of race day, with a high-speed off into the tyres at Noble in race two putting him out on the spot.

The team would work to repair his car in time for race three, but Butcher would again be forced to retire when he was left with nowhere to go when the Infiniti of Carl Boardley had a moment in front of him and the pair collided.

“Despite the disappointing outcome, I genuinely feel there was a lot of cause for encouragement at Thruxton,” Butcher admitted. “I’ve got my starts dialled in now in the Corolla and I learnt more about the car throughout, but it just didn’t translate into the results we deserved.

“We had a very steady first race and collected some decent points, which was our goal, and I definitely feel like we improved the car for race two but the accident obviously put paid to our hopes of another good score. It was just unfortunate; I lost the rear through Noble and couldn’t gather it back up. That was frustrating, because I’d made a good start and was confident I could go on the attack.

“In race three, we then got caught up in another driver’s incident, which clearly wasn’t the way we wanted to end the weekend. As I came around the corner, Boardley was rolling backwards and in that kind of situation, you make a split-second decision, but he accelerated straight into my path.

“It is what it is. Let’s keep our heads up and move on. I feel like the car is giving me all the right feedback, so next time out, I want to exploit that good feeling and get some results for myself and the team.”