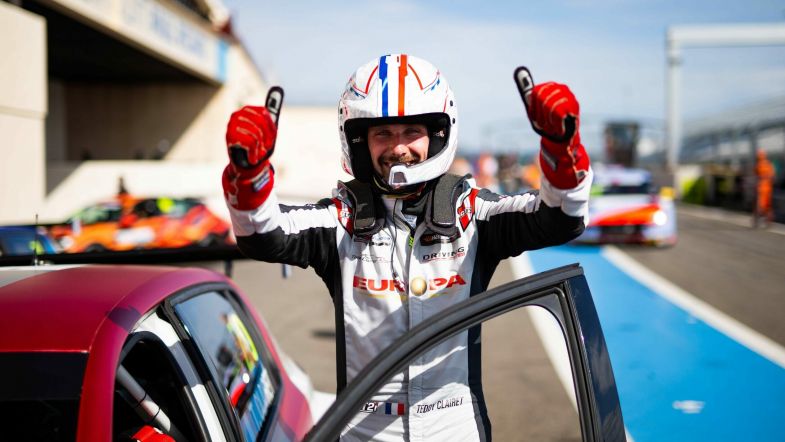 Paul Ricard race one winner Teddy Clairet says his defensive move against Felice Jelmini at the start was crucial to securing a maiden TCR Europe race win on home soil.

The Team Clairet Sport driver started from pole position but had to vigorously stave off Jelmini’s Sébastien Loeb Racing Hyundai Elantra N TCR on the run to the first corner, after the Italian made a super getaway off the line.

Clairet made the regulation one change of direction and held his advantage into Turn 1, eventually leading all ten laps en route to his first career race win.

Speaking to TouringCarTimes following the victory, Clairet said the opening laps were the perfect foundation for the rest of the race.

“You can never be sure of the result, even if the car is that good, racing is always like this,” he said.

“Then, I just told myself to stay focused, stay concentrated on my own job. It was maybe not the most explosive race for sure, but it was very important for me to build the gap as good as I could.”

Clairet also said that winning on home soil was an extra source of satisfaction, particularly after a disappointing weekend at the Slovakia Ring, where he managed a solitary finish of 14th.

Joining Teddy on the podium was brother and Team Clairet Sport team-mate Jimmy, who finished third. For the family-run team, the result was well-received.

“These races are never easy of course, but I had a great car and the victory is just amazing,” Teddy added.

“For me to share the podium with my brother is one of the best feelings I have had in racing.

“On top of that, to win my first race after my first pole at home in France is also a great feeling. I will take a pole and win anywhere but to do it in France is amazing. We had a lot of our partners here, some family too so for me it was very important to do well.”

For Jimmy, Race 1 was a revelation, having started from seventh on the grid following a mistake in the final sector on his fastest qualifying run. A superb start and solid pace throughout gave Jimmy the unlikely chance to step onto the podium in third.

“I could never have imagined before the race that I would finish third,” said Jimmy.

“Everything was good in the first chicane so I was in P3 and I tried to put pressure on Jelmini but he did a great race and so I was happy to finish on the podium.

“I’m so proud for my father and the job he did for us. I think I had good pace in the middle of the race but on the third or fourth lap from the end he picked up his pace and I couldn’t match him.”

Jimmy is the better placed of the Clairet brothers for Sunday’s reversed grid race of the weekend, starting fourth meaning there is a real opportunity for a double family victory.

“Tomorrow is a completely different race of course, and we will try to do our best again,” said Teddy.

“Jimmy is starting fourth so in a very good position. I hope he can win the race because he deserves it, and it would be great to share the podium again.”