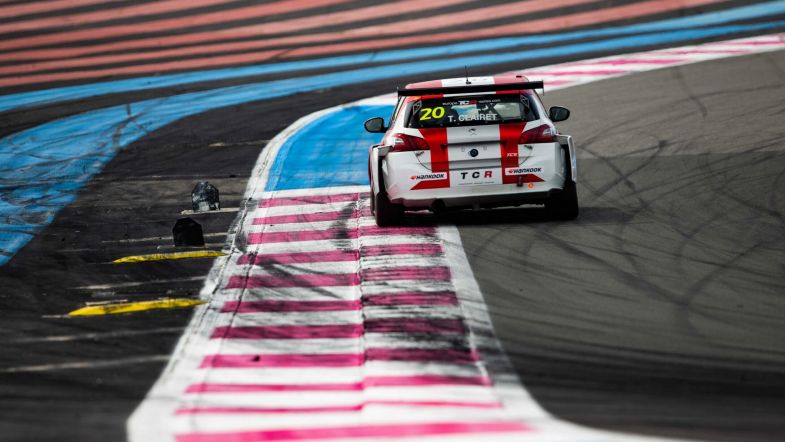 Completing the podium was Teddy’s brother and team-mate, Jimmy Clairet having climbed from seventh on the grid.

Clairet got the best start and led away from pole position but was immediately challenged by Jelmini on the run towards Turn 1.

The Peugeot seemed to move over on the Hyundai Elantra approaching the braking zone, but Clairet maintained his lead over the Italian exiting the first series of turns, as Sami Taoufik was caught up in contact which forced the Moroccan to the back of the field.

Indeed, the SLR Hyundais were swamped on the opening lap, with the exception of Jelmini who remained in touch with Clairet. Bennani was passed by Jimmy Clairet and Azcona but the reigning series champion was soon back on the attack on the third lap of 10.

Azcona’s Cupra León Competición appeared hamstrung by a lack of pace early in the race and the 2018 TCR Europe champion had to defend heavily from Bennani before eventually losing out to the faster Elantra.

Bennani wasted no time in launching an attack on Langeveld and soon moved up to fourth ahead of the Dutchman.

Azcona’s struggles continued as he fell behind Brutal Fish Racing’s Jack Young for sixth, the Honda Civic Type-R driver showing much improved form in France. The battle raged on for several laps with the places changing twice more in the final stages.

Both would inherit one final place on the penultimate lap as Bennani’s efforts came to nothing as he suffered a front-left puncture.

Meanwhile out front, Clairet was in a league of his own and duly came home to claim his maiden TCR Europe victory by just over four seconds, with Jelmini claiming his best series result to date in second.

Off the podium was Langeveld, who came home a solid fourth, ahead of Young who prevailed in his epic battle with Azcona.

Franco Girolami had a largely uneventful race in his PSS Racing Honda Civic Type-R, bagging more championship points with seventh ahead of Race 2, in which he starts on the front-row of the grid.

Race two is scheduled to take place tomorrow at 12:40 CEST.