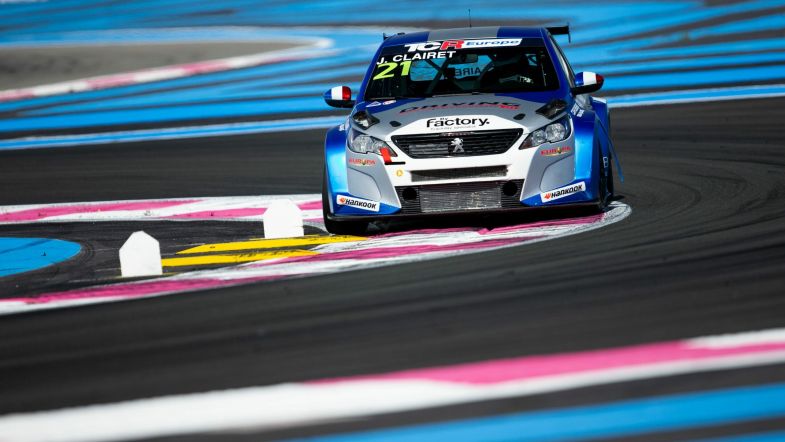 Jimmy Clairet made it a Team Clairet Sport clean sweep of the Paul Ricard weekend by claiming his maiden TCR Europe victory in Race 2, repeating his brother Teddy’s feat from Saturday.

Jimmy, who finished third in Race 1, started from dfourth on the grid but made the most of a congested opening two turns to seize the lead on the first lap, and held his position until the end.

His closest rival throughout was Volcano Motorsport’s Mikel Azcona who never stayed more than a second behind the Peugeot 308TCR driver but was content to finish second to boost his points lead.

Polesitter Viktor Davidovski was denied his first podium finish of the year in his PSS Racing Honda Civic Type-R by Sébastien Loeb Racing’s Sami Taoufik, while there was disappointment for Race 1 winner Teddy Clairety who retired after just one lap.

Off the start, Azcona got the best launch and catapulted himself briefly into the lead as the field navigated the first corner. However, small contact from PSS Racing’s Franco Girolami allowed Clairet to sweep around the outside of Turn 2 to grab the initiative on the opening lap.

Langeveld slotted into fourth place, having jumped ahead of Brutal Fish Racing’s Jack Young, while both made it past Girolami .

Young recovered and fought hard for the final place on the podium with Langeveld until contact between the pair forced Young out with a left-front puncture and Langeveld into the pits on the sixth of ten laps.

That elevated Davidovski back into the podium positions and the SLR Hyundai Elantra N of Sami Taoufik into fourth following a stunning move around the outside of Signes in which he passed three cars in one manouevre. Exiting the Mistral Chicane, he and SLR team-mates Mehdi Bennani and Felice Jelmini went four-wide with the Honda Civic Type-R TCR of Girolami with Taoufik, with the ideal line, assuming the place.

Out front, Azcona continued to stay in touch with Clairet but seemingly unable to do anything about the Peugeot 308TCR in a straight line. The gap remained a constant six-tenths of a second, but the 2018 Series champion failed to make a decisive move.

Clairet held on firm to take his first win from Azcona, while Taoufik was rewarded with third ahead of Davidkovski and Girolami.

Bennani and Jelmini were sixth and seventh, ahead of Tom Coronel’s Comtoyou Racing Audi RS 3 LMS.

The next TCR Europe series race takes place at Zandvoort on June 19-20.