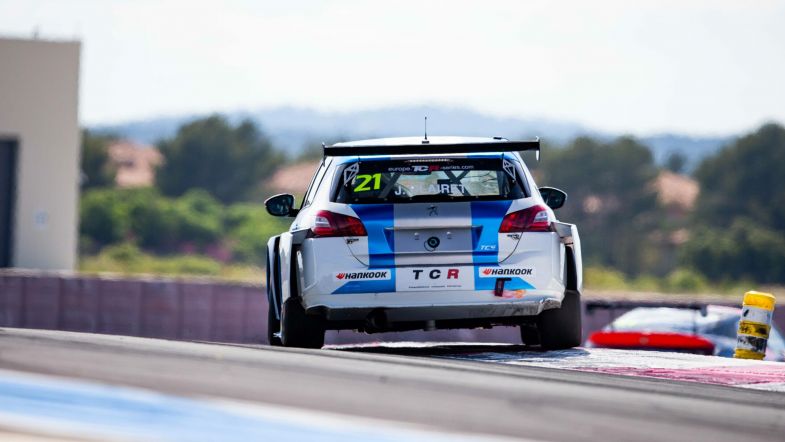 Team Clairet Sport driver Jimmy Clairet says that he could not afford to make “one single mistake” after his maiden TCR Europe victory in Race 2 at Paul Ricard.

Clairet repeated the feat of his brother and team-mate Teddy Clairet from the first race, by leading from the start en route to his first triumph in the series.

The Frenchman, driving on home soil, started fourth on the grid, but led after Turn 2 after Franco Girolami slightly hit the rear of Volcano Motorsport’s Mikel Azcona.

From then on, Clairet was in the clear despite having to withstand ferocious pressure from Azcona until the finish.

“I was really aggressive at Turn 1, like yesterday, which helped me to exit in P1. After that, I was really confident with my car, and the best thing is that I didn’t make a single mistake [all race], never missed an apex, a braking zone.

“With the pressure [coming from] Azcona all race, it was amazing, he was really fast in the last sector but I matched him in the other sectors.

“He was really aggressive on the braking, but I am happy I managed to win.”

For Azcona, it was a case of damage limitation, as the Cupra León Competición ran with far more compensation weight than the Peugeot following the opening weekend in Slovakia.

The 2018 series champion had been faster in the slow sections, but lost out dramatically to Clairet on the long Mistral Straight.

“I got quite lucky [at the start] that I was in clean air, clear track in front of me which is always easier than in the pack,” Azcona told TouringCarTimes.

“Just following Jimmy was difficult, I had to work really hard under braking, going into the corners as much as possible and trying to accelerate better than him and get the slipstream but he was too fast.”

The Clairets are not the only sibling team-mates to have raced in TCR Europe but in winning a race each this weekend, they created history by delivering the first family weekend clean sweep in the series’ history.

Last season, siblings Mike and Michelle each won races but on separate weekends.