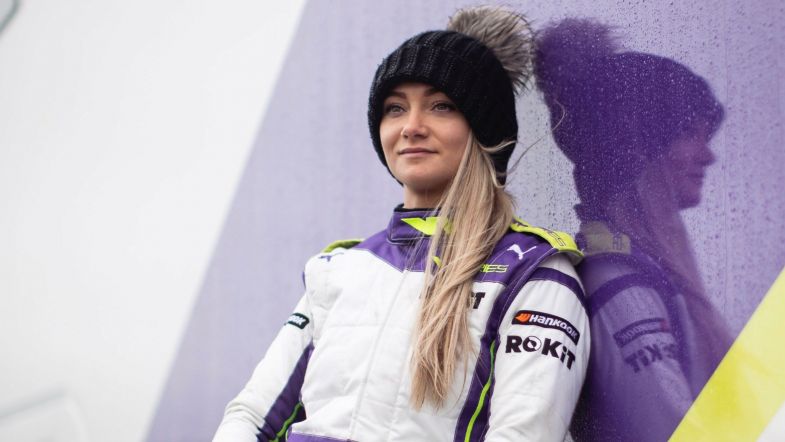 Jessica Hawkins will make her return to the British Touring Car Championship for a one-off outing at Snetterton with Motorbase Performance in place of Andy Neate.

Neate has elected to stand down from his drive for the second meeting of the campaign for personal reasons, citing the aftermath of the incident that occurred in the second race of the season opener at Thruxton.

The 46-year-old had been involved in a clash with Glynn Geddie and Jade Edwards at the high-speed Hampshire circuit and was forced to deal with widespread condemnation on social media afterwards for his part in the collision.

Having decided to step away for a weekend, Neate now plans to return to the grid at Brands Hatch for round three later in June, with Hawkins being given the call by Neate and his family to step in for his second event in the series – the first having come at Snetterton with Power Maxed Racing last year.

“Following on from what can only be described as a bitterly disappointing season opener at Thruxton, and more pertinently the aftermath that has followed; I have personally taken the decision to take a short sabbatical from the BTCC at Snetterton,” Neate said. “However, in avoidance of any doubt, I will be returning behind the wheel of the Motorbase Ford Focus at Brands in June. I will take this time to regroup and remind myself of my confidence and extremely competitive pre-season testing we have demonstrated; I’m really looking forward to Brands Hatch.

“I could not personally think of anyone more qualified, talented nor deserving of a chance than Jess Hawkins. I’ve always been a huge fan of Jess; it gave me so much joy to call her up and ask her to take my seat for Snetterton. Jess is a fantastic British talent and I know she has full-time BTCC aspirations too. I hope this opportunity I can give her will be the platform for her to secure a slot on the grid in the not-so-distant future.”

Hawkins herself, who is set to race in W Series this year, said she was delighted to get the unexpected chance to return.

“Having known Andy and his family for a good few years, I received a call from him last week asking if I was available on the weekend of the next round of the BTCC,” she said. “I did not expect his response to be ‘I would quite like to sit Snetterton out, and I’d really like to put you in the car’.

“Obviously, he didn’t need to ask twice! Shocked and speechless at the time, I am humbled to be on the receiving end of Andy’s generosity – I’ll do my best to make the Neate’s and the team at Motorbase proud. I’m extremely excited to be making a return to the BTCC at Snetterton after my debut there in 2020.”