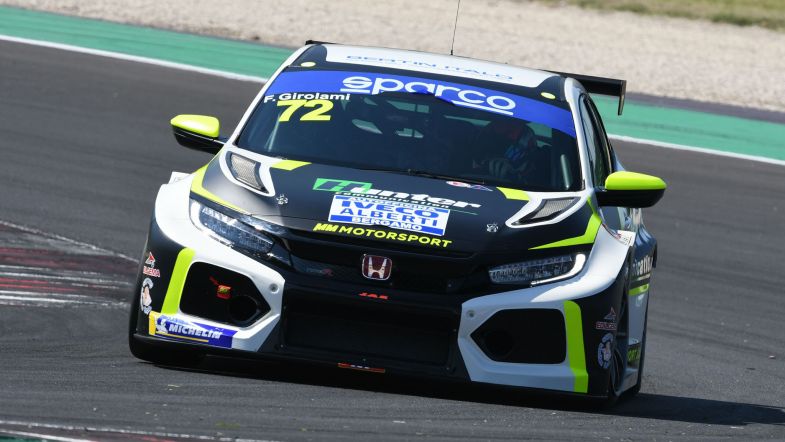 At the start, Girolami kept the lead ahead of Target Competition’s Antti Buri and his team-mate Nicola Baldan, who made a slow start and lost out at the green light. Jack Young of MM Motorsport sat in fourth place.

The safety car was called into action on lap two as Raffaele Gurrieri, driving a Cupra of Scuderia del Girasole, went off the track and was stuck in the gravel trap. Gurrieri was recovered and retired from the race.

The race was relaunched on lap three, with Young overtaking Baldan for third place, and later also Buri for the second spot. Salvatore Tavano of Scuderia del Girasole held fifth and started to close in on the Target Competition drivers ahead of him.

Damiano Reduzzi tried an impossible move on Hyundai driver Igor Stefanovski on lap four, with both colliding on the track and retired from the race.

Tavano’s troubles continued, with the reigning champion losing out to Ceccon and Brigliadori on lap eight, and fell into Honda driver Ruben Volt’s grip. Tavano lost the position to Ruben not long after.

Young retired with a technical issue on lap nine while running in second place.

On the following lap, Matteo Poloni collided with Federico Paolino on the main straight. Poloni received a 25-second time penalty for the incident.

The safety car had to be called into action for the second time as Marco Butti of Elite Motorsport went off and got stuck in the gravel trap on lap eleven.

The race was restarted with just two minutes plus one lap left on the clock, with Girolami remaining at the front ahead of Buri and Baldan. Ceccon kept the pressure on Kouril, but the Serbian defended and provided no opportunities.

Girolami took the victory at the chequered flag, with Buri and Baldan completing the podium. Kouril fended off Ceccon to finish in fourth position, with Brigliadori in sixth place, ahead of Ruben and Tavano.

Tavano still leads the championship on 108 points, followed by Brigliadori with 101 and Ceccon with 90.

The start of Race 2 is scheduled for 09:40 CEST on Sunday morning.