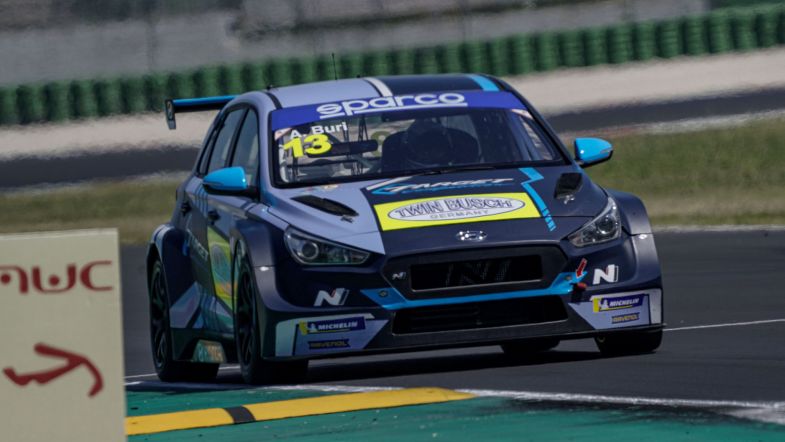 Target Competition’s Antti Buri claimed victory in the second race of the weekend at Misano as the circuit played host to the second round of the 2021 TCR Italy season.

At the start, Damiano Reduzzi in his Trico WRT-run Hyundai i30 N TCR took the lead ahead of the Cupra of Salvatore Tavano and Buri, also with a Hyundai.

On the first lap Ettore Carminati crashed his Hyundai out of the race, with the safety car coming into action. Tavano was handed a 25-second time penalty for an infraction during the starting procedure.

Reduzzi kept the lead at the restart, with Buri under attack from MM Motorsport’s guest driver Jack Young.

Buri overtook his team-mate for the lead on lap three, whilst Tavano lost out to the other Target Competition Hyundai in the hands of Nicola Baldan. Baldan and Young went side-by-side, with Tavano overtaking both.

Baldan didn’t give up on a possible podium, regaining fifth place from Girolami on lap ten. The Argentinian then went wide at the last corner on the same lap, causing damage to his Honda and retiring from the race.

Second place Reduzzi got a drive-through penalty for an infranction during the starting procedure. Buri continued leading, ahead of Young and Baldan, who overtook Tavano for third on lap eleven, as Reduzzi came in for his penalty.

Further back, Federico Paolino made contact with Matteo Poloni’s Audi RS 3 LMS, spinning the car on the track, with the safety car called into action to clean the debris from the incident. Poloni received a 25-second time penalty for the incident.

The race was restarted with barely enough time for two racing laps. Buri led, with Baldan attacking Young for second place. Tavano took advantage of the antics between the two to close on Baldan.

But Baldan continued putting pressure on Young during the last lap, attempting the overtake at the very last corner, with Young carrying too much speed and going wide.

At the chequered flag, Buri took his first victory of the season, with Baldan in second place and Young.

After the second round of the season, Brigliadori now takes the championship lead with 128 points, followed by Buri, two points behind and Ceccon, eight points adrift.

The next round of the TCR Italy takes place at Vallelunga on the 25-27th of June.