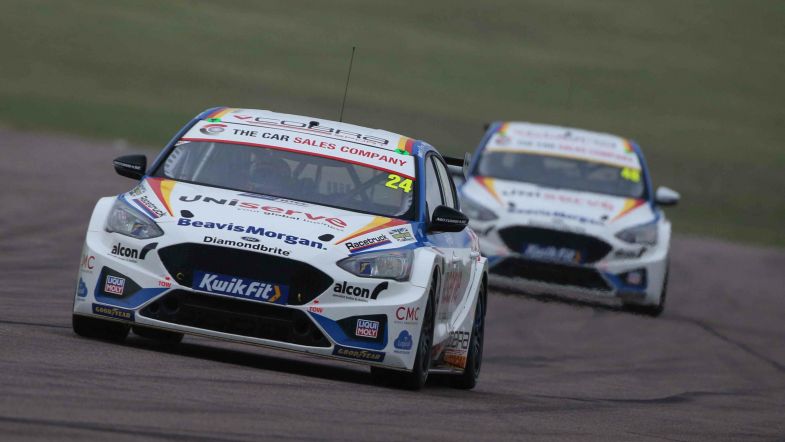 Fans make their return as BTCC campaign resumes at Snetterton

Fans of the British Touring Car Championship will make their long-awaited return to the race track this weekend when the 2021 season resumes after a short break at Snetterton.

Round two of the campaign was delayed slightly to ensure that a limited number of fans would be able to attend the race meeting, with all 4,000 available tickets for race day having been sold, and only a limited number available for Saturday’s qualifying and support race action.

Jake Hill currently leads the way for MB Motorsport on the back of his best weekend in the series to date at Thruxton last month, where he finished on the podium in all three races at the wheel of his Focus Focus.

That was enough to ensure that Hill holds a slender one point advantage and he will now seek to try and defend that lead at the longest circuit on the calendar.

“I don’t think anyone looked at us as being likely championship leaders before Thruxton – least of all ourselves!” he said. “We were quick in the wet practice sessions, and were in with a real shot of pole – or certainly a top-four start – so it wasn’t a surprise to me and the team we were able to race as well as we did.

“The car was really strong all weekend, and on a circuit we weren’t sure if it would be a good one for us. So coming to Snetterton, where the guys have done some very beneficial testing here over the winter, and where last year I just missed out on pole, I am really looking forward to it and think we should be in good shape.”

Hill will however be forced to contend with carrying maximum success ballast into the weekend, which could be crucial in the two-part qualifying session on Saturday.

“There are plenty of things to think about, but it will make for some mega action.”

Just behind Hill in the points sits Josh Cook, who scored a pair of wins at his home circuit but then lost out to a penalty at the start of race three for having work carried out on his car beyond the allotted time.

Cook does however lead the Independents’ points, with Hill now no longer eligible after Motorbase took the decision to enter as a constructor outfit this year.

Jason Plato sits in third sport after a strong start in his Power Maxed Racing Vauxhall Astra and will hope to challenge for victory at a circuit where he has more wins than any other driver, with defending champion – and former team-mate – Ash Sutton two points further back in fourth spot.

Sutton endured a tough start to the weekend at Thruxton after running into problems in the opening two races but bounced back with victory in race three to ensure that he heads to round two amongst the leaders in the standings.

Dan Cammish lies fifth but is now out of the remainder of the season as he returns to the Porsche Carrera Cup, with Senna Proctor instead coming in to drive the BTC Racing Honda that Cammish took over in a one-off outing at Thruxton.

Like Cook, Tom Ingram was hit with a penalty in the final race of the weekend at Thruxton having earlier scored a first podium finish in his new EXCELR8-run Hyundai. Despite the disappointment of the lost points in race three, Ingram might actually now benefit at Snetterton given that he will carry less weight on the i30 Fastback N into qualifying and the opening race.

“We know that Snetterton is a circuit where the weight can have an impact, so that could be important when it comes to qualifying,” he said. “I’ve got a good record at Snetterton with a pole position, a win and a number of podiums, and it’s now something of a second home event for me given it is the home circuit for the team.

“I do need to try and recover some points after round one but I’m not feeling stressed as I know the car will be strong; I’m super chilled and my head is in a good place. I’m also looking forward to having some fans watching trackside for the first time in a while, as they’ve certainly been missed.”

Another driver looking to make up ground after round one is Colin Turkington, but the Team BMW man is another who has a strong record at the Norfolk circuit in the past – with seven wins in the past.

Most impressively was a stunning weekend last year where Turkington secured 60 points from a possible 67 and having fully recovered from the back injury that affected him throughout the opening weekend, the Northern Irishman will hope for another big haul of points.

“The five-week break has been a lifeline for me to get my back fixed and I’m now fully-recovered and excited to start the season afresh at Snetterton,” he said. “I’m fired-up to get back to competition and attack the season like I had planned to at Thruxton.

“I like the top ten Shoot-Out format on offer this weekend and the pressure it creates in qualifying. The weather is looking great for spectators back trackside too and I know this will create an atmosphere and a sense of occasion we all enjoy.”

Dan Rowbottom is the leading Team Dynamics driver in the points in a solid P8 ahead of Tom Oliphant, with Jack Goff rounding out the top ten for Team HARD and the new Cupra.

Elsewhere, the likes of Gordon Shedden, Chris Smiley and Rory Butcher will hope for improved luck this weekend after getting caught up in scrapes during round one, whilst Proctor and Jess Hawkins will both appear on track for the first time this season replacing Cammish and Andy Neate respectively.