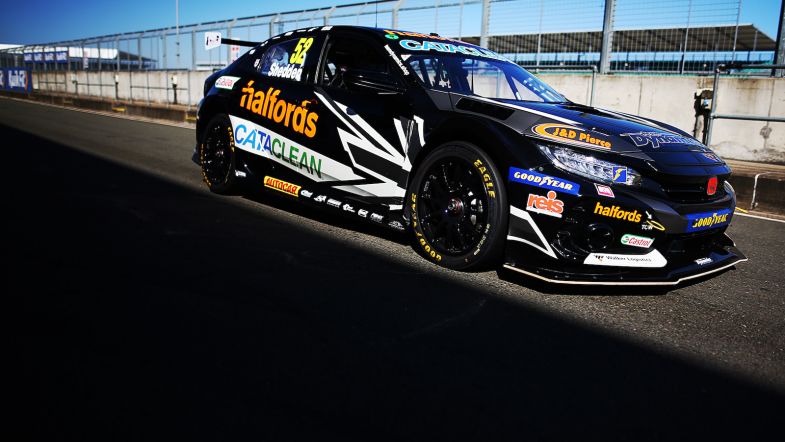 Gordon Shedden secured pole for the second meeting of the BTCC season at Snetterton after beating Colin Turkington the fastest time in the top ten showdown session.

The opening phase of the session would be used to determine which ten drivers made it through to the battle for pole position, and would set positions eleven and beyond for Sunday’s opening race.

With the front-wheel drive cars swapping tyres before going for quick laps, it was Ash Sutton who set the early pace in the Infiniti Q50 before the BMWs of Tom Oliphant and Colin Turkington moved ahead – Turkington getting down into the 1:55s bracket in the process.

Oliphant then edged back ahead as he went just under a tenth of a second quicker only for Turkington to then go purple in all three sectors as he improved his advantage at the front out to four-tenths of a second.

Behind, Tom Ingram – the quickest man in practice – put himself right into the mix on his first timed run to sit in P4, with Shedden’s Honda going into second despite a slide going into the final corner.

Heading into the final ten minutes of Q1, there were a number of drivers who found themselves outside the bubble, including Sutton who had been shuffled back to 15th having lost his quickest time to track limits, and double Thruxton winner Josh Cook one spot further back.

Jason Plato’s Vauxhall was down in 20th spot, with Rory Butcher not even having a time on the board as a result of losing two times to track limits.

Heading into the closing stages of Q1, Butcher would improve to get into the top ten in fifth but Sutton would fail to make it out onto the track in time to get round to start a lap before the clock ran down to zero.

Cook would also fall at the first hurdle in his Honda Civic and starts just behind Sutton on the grid with the pair in 16th and 17th, but that was still ahead of Plato as he could only manage the 19th fastest time – just behind Jess Hawkins as she impressed in the Motorbase Ford Focus.

Out front, Turkington scored the fastest time from Ingram and Shedden, with Oliphant, Butcher, Jake Hill, Stephen Jelley, Ollie Jackson, Dan Lloyd and Adam Morgan making it through to the fight for pole.

Turkington had posted the best time of the weekend to date in Q1 and he set the first quick lap in Q2 – albeit eight tenths of a second slower than in the first part of the session. That put the Northern Irishman seventh tenths clear of Oliphant and Adam Morgan but Ingram and then Shedden jumped into the 1:55s on their first timed runs to knock Turkington back to third.

Ingram would have to settle for third in the Hyundai ahead of Butcher, with Jelley and Morgan rounding out the top six.

Jackson and Hill followed behind, with the championship leader struggling with the ballast on his car, and Lloyd and Oliphant rounding out the top ten.

Lloyd was the big loser in the second phase of the session, losing two times to track limits.