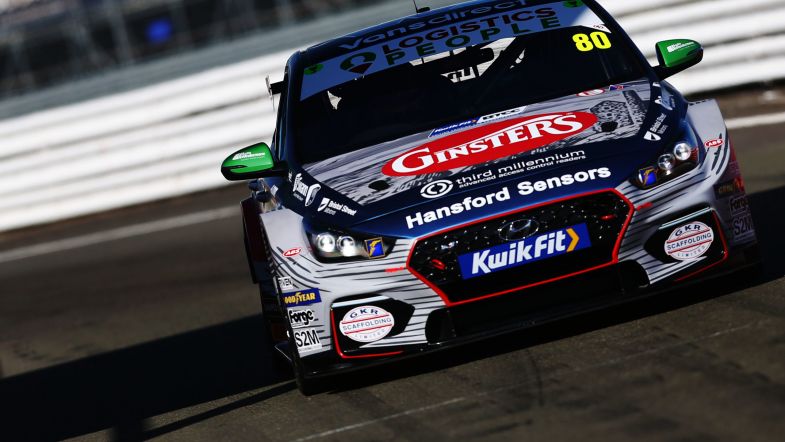 Tom Ingram topped the times in first practice for the second meeting of the BTCC season at Snetterton; the first session with fans trackside for some 18 months.

At the home circuit for his EXCELR8 Motorsport team, Ingram was the only driver to dip under the 1:56s marker during the session, which saw a number of drivers encounter problems – despite a shakedown on Friday evening which should have provided the chance for any gremlins to be dealt with.

Ingram’s time in the Hyundai i30 Fastback N put him three-tenths of a second clear of Ash Sutton, with the defending champion one of the drivers who would fail to set a time until the closing stages of the session, rapidly rising up the order to eventually end up with the second fastest lap.

Sutton edged out the BMW of Colin Turkington, with the Northern Irishman being the final driver who lapped within half a second of Ingram’s benchmark time. Gordon Shedden was just over half a second off in the first of the Team Dynamics-run Hondas, with Stephen Jelley’s BMW and Dan Lloyd’s Vauxhall following behind.

Championship leader Jake Hill was ninth quickest in his MB Motorsport Ford Focus, but was one of the drivers to hit trouble during the session.

Hill had managed just five laps before a cross-threaded wheel nut brought his session to an early conclusion, with his best time being just over a second off the pace.

That was still better than Dan Rowbottom was able to manage in the second Dynamics car, with Rowbottom unable to set a timed lap due to a sticking calliper on his Civic Type R.

Of the two newcomers for this weekend, Senna Proctor was 17th fastest in his BTC Racing Honda – carrying the success ballast that Dan Cammish accumulated at Thruxton – with Jessica Hawkins in an encouraging 20th despite the fact she was sampling her Motorbase-run Focus for the first time.