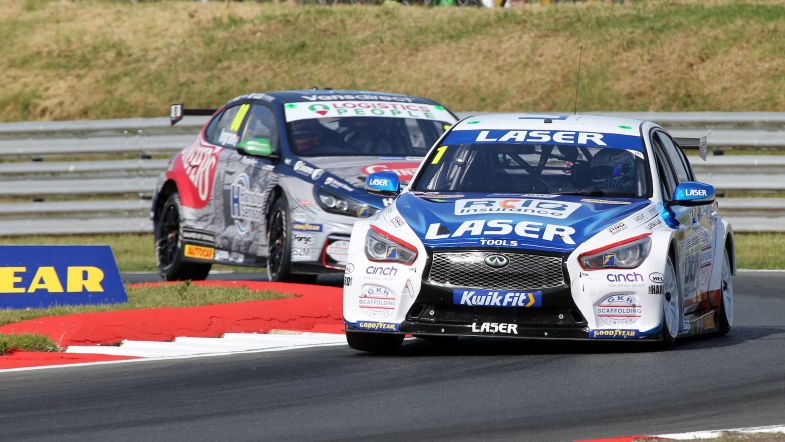 Ash Sutton admitted he was surprised to hit the front in the BTCC standings after a fine recovery from issues in qualifying at Snetterton.

The Laser Tools Racing driver was left with work to do on race day after encountering engine problems on Saturday, which left him down in 15th place on the grid for the opening race.

After an overnight engine change, Sutton kicked off his race day with eleventh in race one, but it was race two where he was on a real charge – storming through the pack to secure victory.

Another podium finish in race three after keeping the Honda of Gordon Shedden at bay means Sutton now heads the standings, with a two point advantage over Tom Ingram to take to Brands Hatch next time out.

“If someone had offered me this yesterday then I’d have taken it, and a win and second is great,” he said. “The championship lead is just the icing on the cake as the car has been mega all weekend but what happened in qualifying changed how we had to approach things. Hopefully the results today reward the team for the effort they put in on Saturday night to change the engine.

“We’ve had to make a lot of changes this weekend to deal with the changes in the tyres and the weight, and it’s great that we are back on top of the standings. We clawed it back here in the same way we clawed things back at Thruxton but the season is long and there is plenty more racing to come before the trophies are handed out.

“I think there will be lots of twists and turns, but we’re in a good place now heading for Brands Hatch.”