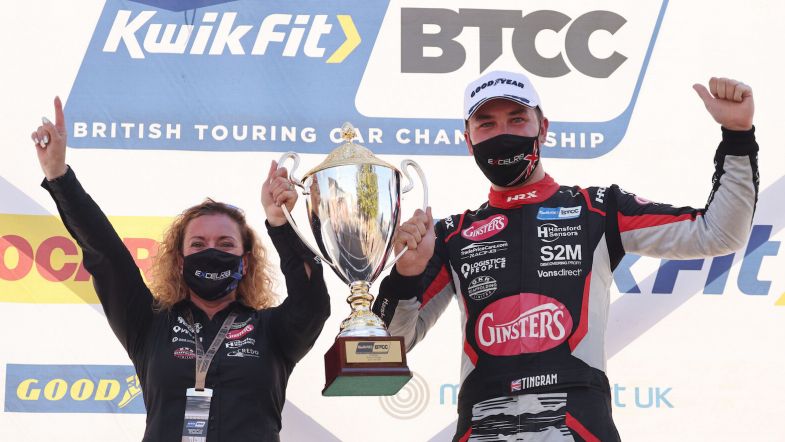 Tom Ingram said he was proud to help the EXCELR8 with TradePriceCars.com team open its account in the British Touring Car Championship after securing victory in the final race of the weekend at Snetterton.

Ingram picked up a podium finish on his debut with the team at Thruxton last month and was a front-runner from the outset in round two, showing strong pace in practice before qualifying on the front row of the grid – albeit only after Gordon Shedden was excluded from the session.

The former Indy champion would push hard at the start of race one to try and get ahead of Colin Turkington’s BMW before being forced to settle for second place, and he then followed that up in race two with a solid fourth spot having added additional weight to the Hyundai i30 Fastback N.

From fourth on the grid for race three, Ingram battled his way to second in the early stages before fighting his way ahead of Stephen Jelley into the lead and was then able to build a slender advantage that he held to the flag for a first win of the year.

It was also the first win for EXCELR8 in the series, and the first BTCC success for a Hyundai car.

“After a good first event with the team at Thruxton, to come to Snetterton and leave with a win, a second place and a fourth is amazing,” he said. “We entered the weekend targeting big points, and that’s exactly what we achieved.

“There are some amazing moments to look back on this weekend, and to get the first win for EXCELR8 at the team’s home circuit is great – and particularly with fans at the track again. We have really smashed it this weekend in terms of points which is a big thing as we have moved up in the standings, and hopefully we can only go forwards from here.

“I’m lucky to have been able to take a few wins in the BTCC in my career and that one feels special. I honestly can’t praise all the Ginsters EXCELR8 with TradePriceCars.com guys and girls highly enough for the phenomenal job that everyone has done – I know how much this result means to everybody in the garage, and it was wonderful to share the moment with them all.

“In particular, I owe my engineer Spencer a huge ‘thank you’ for putting an insanely good car underneath me all weekend – massive credit to him. We could see the potential in the i30N from the start, and Spencer and I have refined it with all the knowledge we’ve gleaned together over the years. This is such an exciting time for us, and to have now secured Hyundai’s first BTCC win is just awesome. Hopefully it’s the first of many…”