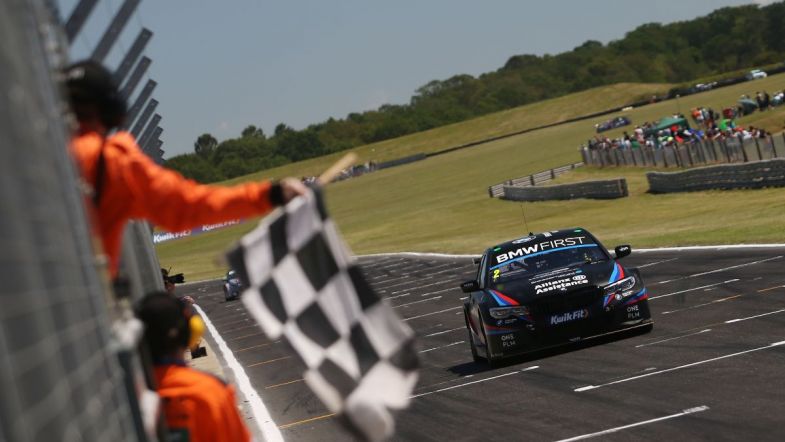 Colin Turkington: “It’s important to get these big points on the board”

Colin Turkington insisted that it was “important to get big points on the board” after another strong showing on track at Snetterton during the second meeting of the BTCC season.

The West Surrey racing driver enjoyed his best weekend of the year at the Norfolk circuit in 2020, scoring 60 points out of a possible 67 to reignite his title challenge as the season headed towards its conclusion.

This time around, Turkington was chasing his first silverware of the season after a tough opener at Thruxton, and qualified on pole after the penalty given to Team Dynamics driver Gordon Shedden.

Turkington was able to convert pole position into victory in the opening race of the weekend on the soft tyre, fending off the early challenge of Tom Ingram to secure his 57th victory in the series and closing to within three wins of Andy Rouse for third on the all-time winners list.

The Northern Irish man then lead the way in the early stages of race two despite maximum ballast onboard his car, before losing out to a charging Ash Sutton in the closing stages and finishing up with second spot.

A seventh place finish in the final race of the weekend ensured a strong haul of points for the former champion however, who admitted he was delighted at being “back in the game”.

“Snetterton is quickly becoming one of my favourite circuits!” he said. “It’s been a good hunting ground for the last few years after scoring 60 points last year and then 50 points this year, and I feel like we are right back in the game again.

“Tyre strategy has been important this weekend and everyone has their own reasons why they chose to run it in different races. The soft tyre worked well for us on the BMW, and it is a little easier when you are leading and can manage it a bit more.

“It’s an exciting element to bring back into the series going forwards compared to last year, and adds that extra strategy when you also consider the weight as well.

“We’ve been able to deliver the results this weekend, even with 75kg on board in the second race, and I’m leaving Snetterton happy. You never lose these points, so it’s important to get them tucked away as there are going to be ups and downs as the season goes on.

“It’s also nice to get that first win of the year under out belts, especially with some fans back trackside again. It’s a nice feeling to share a win with them.”