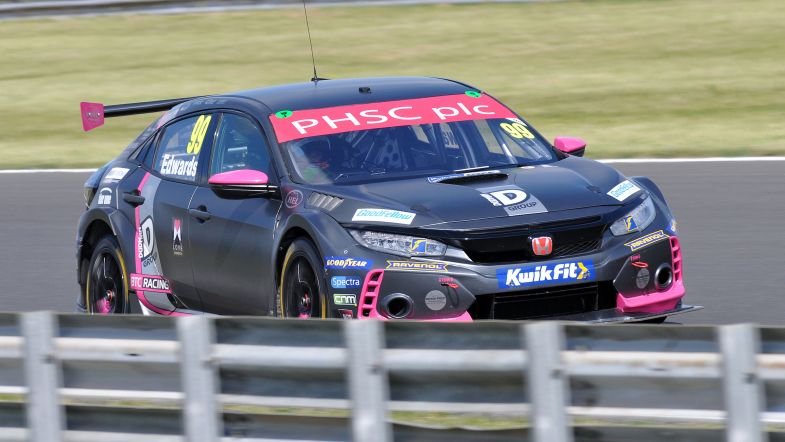 Jade Edwards delighted to put points on the board

Jade Edwards admitted she was delighted at becoming the first female driver to score points in the BTCC for well over a decade at Snetterton.

The BTC Racing driver went into the weekend keen to fight back from a challenging opening round at Thruxton, where she was caught up in the multi-car accident in race two and then retired from race three with a technical issue.

Edwards qualified in 24th place and endured a tough opening race as she lost places early on before recovering back to 25th at the chequered flag. Surviving a clash on the opening lap of race two, Edwards moved her way up to 23rd place and headed into the final race of the weekend looking to maintain her forward momentum on the soft compound tyre.

The opening lap would prove to be key as Edwards latched onto the rear of Jake Hill’s Ford Focus and made up five places, and climbed up into 16th heading into the closing stages.

When Aiden Moffat dropped back down the order on the final lap, Edwards was able to take 15th place and the final championship point, making her the first female driver to score in the championship since Fiona Leggate at Thruxton back in 2006.

“It’s a brilliant way to end the weekend as it’s been a tough one,” she said. “I haven’t really had the best time and I’ve struggled a little bit, which I’ll happily admit, and it hasn’t been an easy one for us as a team.

“I’ve found myself towards the back a bit, but in race three on the soft tyre, I got a good start and saw Jake Hill go for the outside ahead and I thought ‘Right Jake, let’s go’. I followed behind him and it worked, so I think I made most of the moves on that lap and then held on to get my first point at the end.

“This is probably one of my weaker circuits, so to be rewarded in race three with a positive finish makes the drive home a little bit easier. It’s a great feeling to get points on the board and I need to give credit to Steve Dudman, BTC Racing, all my sponsors and the team sponsors, as I wouldn’t be here without them.

“Hopefully this result repays the faith that they showed in me at the start of the season, and it would be good if we can carry the momentum from race three into the next round at Brands Hatch, which is a circuit that I enjoy a lot more.”