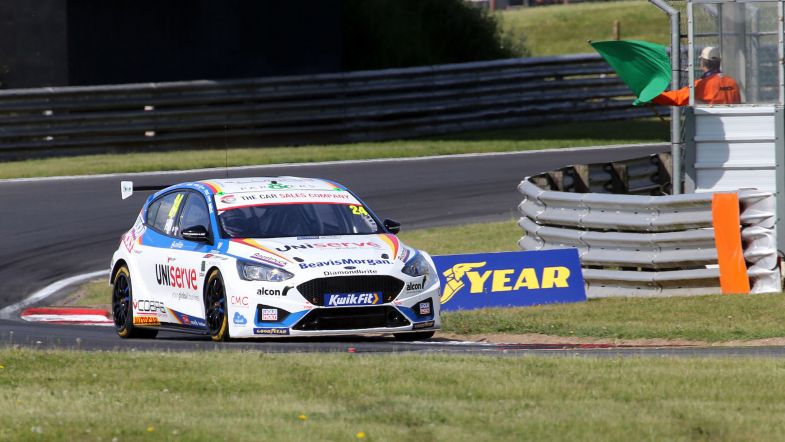 Jake Hill admitted he was gutted by tyre issues in the second race at Snetterton after losing his position as BTCC points leader.

The MB Motorsport driver led the way heading to Norfolk after scoring three podium finishes from three starts in the season opener at Thruxton, taking a small lead in the standings ahead of Josh Cook.

Despite carrying maximum ballast on his Ford Focus, Hill qualified in a solid seventh place on the grid for the opening race, well ahead of his closest rivals in the championship standings.

He then followed that up with a solid ninth place finish in race one despite running on the medium compound tyre against a number of soft-shod rivals.

Electing to run the soft tyre, and with the ballast now out of the car, Hill was hopeful of forward progress in race two but would ultimately go backwards after being run wide by Aiden Moffat and then being forced to deal with excess tyre wear; eventually ending up well done the order in 24th place.

A strong start to race three saw Hill come through to the fringes of the point scoring positions, and he would battle his way through to twelfth by the time the chequered flag dropped, despite being forced to manage an engine issue on the car.

It means Hill has now slipped to fifth in the standings going into his home round at Brands Hatch in two weeks time.

“We did a great job in race one to finish in ninth place when you consider how heavy we were with the ballast,” he said, “and we did well against our competitors as well. In race two we were on the soft tyre but we made a wrong call on the set-up. It destroyed the tyres completely to the point where metal was coming through the canvas, so I was absolutely gutted with it.

“In race three we were going quite well but then there was an engine issue with about six laps to go which hampered all progress, and I was lucky enough to be able to keep [Dan] Lloyd behind and score some points.

“We had a high at Thruxton and this has been a low but it’s one of those things that happens. We are quick and we know will come back strong and I’ll be going to Brands Hatch with less weight so I’m hopeful we can smash out some good results.”