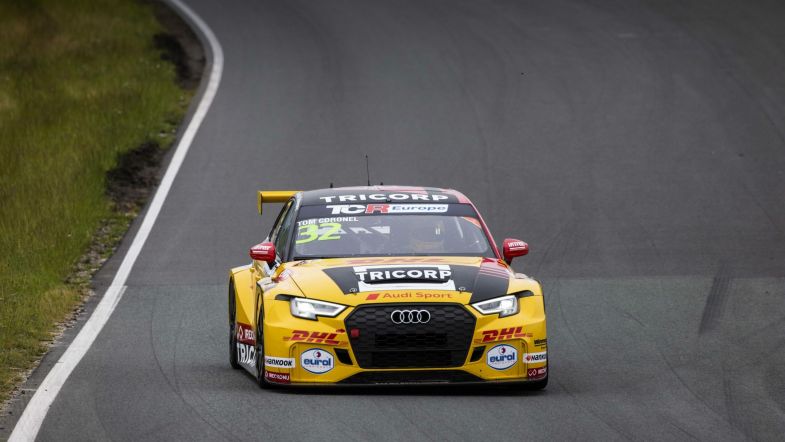 Tom Coronel: “I knew I had to overtake quickly for Race 1 win”

Zandvoort Race 1 winner Tom Coronel says he knew he had to make a quick overtake on Jack Young to secure a first TCR Europe Series victory of the season.

The Comtoyou Racing Audi driver recovered from a poor start to catch and pass Brutal Fish Racing’s Young in the closing laps to take his first victory of the year.

Coronel, who knows the Zandvoort circuit well, used his knowledge to ease away from Young in the remaining laps.

“It’s one of those important races where you like to score [big] for the home crowd, of course I know the track very well,” Coronel said post-race.

“I nearly drive the track every week here, even on Monday I have a two-hour race.”

Coronel’s race was not lacking drama though, despite what appeared to be a controlled performance in the end. The Dutchman was under investigation after the finish following an incident with Comtoyou team-mate Nicolas Baert, whereby Baert was ushered off track by Coronel as the pair disputed second place.

Despite this, Coronel reckons his superior pace around the twisty second sector of the Zandvoort cicuit was what ultimately helped him secure the win.

“[with Baert] I passed him on the inside and then on the outside, I didn’t expect him to be there, because I thought he knew where I was, so that was a pity,” explained Coronel.

“I charged past Borković and then with Young, I saw he was having some problems at Schievlak and I thought that I had to do [the overtake] quickly and directly. So I did and it was nice.

“Compared to last year, we are 50kg heavier than with the Honda, I have driven Hondas a lot but am now with the Audi in this championship but also the WTCR. But I saw the speed traps and I thought ‘there is no chance I can overtake him here [on the main straight] and that’s what I saw when I caught him.

Coronel will start tomorrow’s second race at Zandvoort from ninth on the grid, with Hyundai’s Niels Langeveld and Sami Taoufik on the front-row.