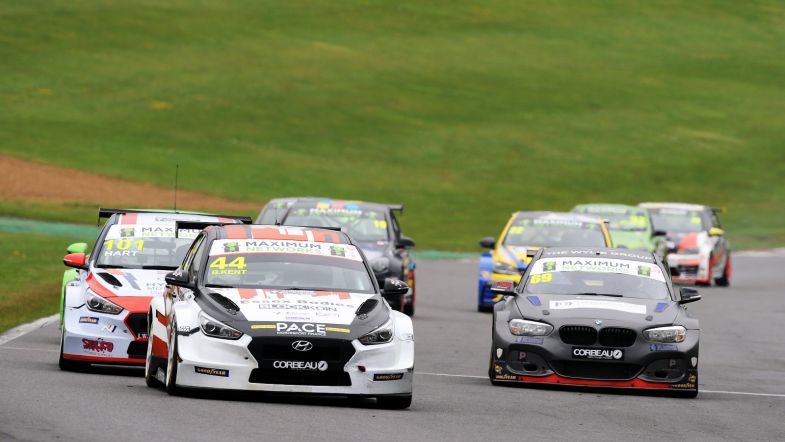 Dan Kirby, Lewis Kent and Bradley Kent shared victory as the the Touring Car Trophy incorporating TCR UK headed for Brands Hatch for the third meeting of the campaign.

The meeting around the short Indy layout marked the first triple-header of the campaign after meetings at Silverstone and Castle Combe, and ended with Lewis Kent holding a 49 point lead in the standings.

Qualifying on Saturday saw Bradley Kent secure his first pole position in the series at the wheel of his Hyundai i30 N; the Essex & Kent Motorsport driver being the only person to break the 50s marker as he headed the Cupra of Bruce Winfield.

Elder brother Lewis secured the third best time ahead of Max Hart, with the top six rounded out by Jac Constable’s Cupra and the leading TCT class car in the hands of Darron Lewis.

The opening race would be a chaotic affair, and ended with a surprise winner in the shape of Dan Kirby – despite him starting back in tenth spot after a below-par qualifying result.

Winfield took the lead when the action kicked off ahead of a slow-starting Bradley Kent but on lap two, Lewis Kent and Hart touched at Druids, leading to Hart going off into the tyre wall. With the Hyundai of TCR debutant Chris Wallis also going off at Clearways, the safety car was deployed before the action was halted when it became apparent that removing Hart’s car was going to tae longer than expected.

On the restart for a shortened race, Winfield again took the lead of the race but then made an error at Clearways and ran wide, allowing Toby Bearne’s Mercedes into the lead.

That wasn’t for long however, as Bearne had a wild moment at Paddock Hill Ben and collected Bradley Kent, putting the Hyundai off the road and allowing Kirby – who had avoided the chaos ahead on both starts – through into the lead.

Kirby would be chased by a recovering Bearne from the that point on but he would secure the win when the action was halted a second time after Lewis went off at Clearways in his Mercedes and brought out another red flag.

That handed Kirby a maiden win from Bearne and Constable – both of whom took to the podium for the first time – with Lewis Kent taking fourth after a late move on Winfield as he looked to fight back from the earlier contact with Hart.

Will Butler took sixth ahead of Will Powell – who secured his first finish of the season – with Alex Kite in the DW Racing Astra completing the top eight.

Butler started the second race of the weekend from the reverse grid pole but lost out to Winfield at the start, only for the action to be halted as a result of a clash at turn one between Butler and Constable which put the pair out of the race.

When the action resumed, Winfield held the lead from Lewis Kent and Kirby with the top three edging away before Kent managed to make his move to take first at Graham Hill Bend.

Once ahead, Kent quickly gapped the chasing pair as he eased away to secure his second victory of the campaign, with Kirby also passing Winfield late on to secure second place. Winfield would end up not even making the podium despite a strong run the Cupra, with the TCT class Mercedes of Bearne also getting ahead before the finish to secure third spot.

Winfield had to settle for fourth ahead of the Hyundais of Bradley Kent and Hart; the pair spending a large portion of the race caught up behind Kite’s Astra. Dan Wylie’s BMW was the final classified finisher.

The final race of the weekend would be another dramatic affair, which was led from the start by Winfield who jumped from fourth into the lead going into Paddock Hill Bend for the first time.

After an early safety car period to remove a VW Cup car from the circuit, Winfield led the way from Bradley Kent, Hart and Lewis Kent – with the three Hyundais battling to try and get ahead of the Cupra until Lewis joined the party in his Mercedes and managed to get ahead of Lewis Kent into fourth.

After another caution to remove Wylie’s BMW, Winfield finally lost the lead to Bradley Kent, with Hart also following through and Lewis then dived up the inside into Clearways.

Contact between the Mercedes and the Cupra saw both run across the gravel before rejoining behind Lewis Kent and as they then headed into Paddock Hill Bend, further contact saw Winfield spin off into the gravel.

That saw the red flag brought out to end the race with Bradley Kent winning from Hart and Lewis Kent, with Kirby and Butler the final two finishers after Lewis’ Mercedes was excluded from the results.

The series heads to Oulton Park next month for round four.