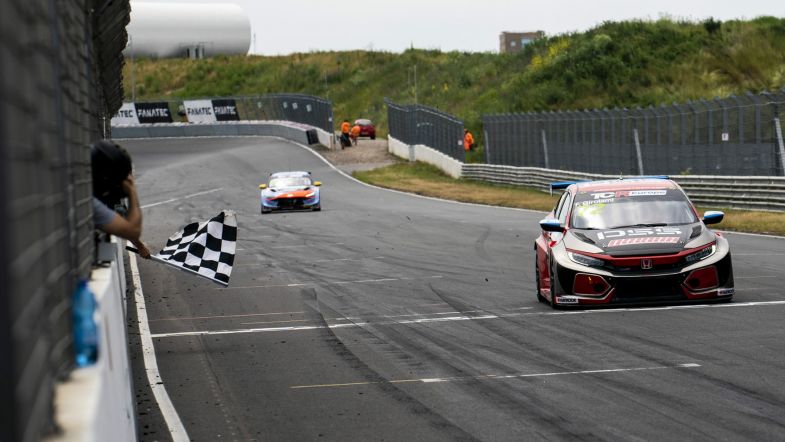 The Honda Civic Type-R driver, whose previous best finish this season was third place at the Slovakiaring, made the most of Mikel Azcona’s absense in the Netherlands to vault to the top of the points, while other rivals failed to take their chances in the two races.

Girolami will take an 11-point margin over Azcona into the Spa-Francorchamps meeting, a weekend Azcona said after Paul Ricard that he might not race at, with Zandvoort Race 1 winner Tom Coronel a further 11 back in third.

Although Girolami seemingly has a healthy lead at the top of the table, such has been the unpredictability of the TCR Europe season so far – Girolami was the sixth different winner in as many races – that anything can happen at Spa next month.

One thing which is likely to change for the trip to Belgium is that the Honda faces a hefty compensation weight gain thanks to the successful weekend in Zandvoort, while the Hyundais of defending champion Mehdi Bennani (currently fifth in the standings) and Niels Langeveld (who finished second in Race 2) looking like dropping weight.

After predicting a difficult weekend after practice on Friday, Jimmy Clairet managed to consolidate his third place in the standings heading to Belgium. The Team Clairet Sport Peugeot 308TCR driver is tied on 132 points with Tom Coronel in the points after a seventh and fifth place finish in the two races respectively.

Bennani is just six points further back in fifth with SLR team-mate Langeveld another two behind in sixth.

The two Hyundai drivers have some margin over Comtoyou Racing’s Dušan Borković who enjoyed a pleasant return to form in his Audi RS 3 LMS this weekend, recording a third and fourth.

Nicolas Baert was perhaps the unluckiest of the Comtoyou Racing Audi drivers at Zandvoort, after only managing a sixth and eighth place finish in each of the races, having battle team-mate and Race 1 winner Coronel for second at the time in the opening race. He sits on 107 points, just two ahead of Brutal Fish Racing’s Jack Young and 24 ahead of SLR’s Felice Jelmini.