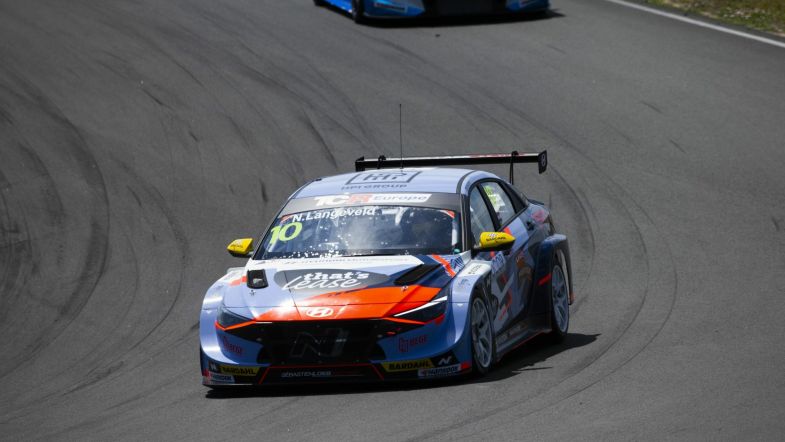 Sébastien Loeb Racing’s Niels Langeveld says there is a degree of disappointment in missing out on a first TCR Europe series victory on home soil, despite finishing a close runner-up to Franco Girolami in Race 2.

The Dutchman was by far the best performing Hyundai Elantra N TCR drivers all weekend and secured his first podium finish of the season after managing a trio of fourth places in the five previous races.

Langeveld started from the front-row of the grid for the reversed-grid second race, alongside SLR team-mate Sami Taoufik and took the lead on the opening lap after running side-by-side with his Moroccan stablemate.

But he was unable to fend off the quicker Honda of Girolami and had to settle for second in the end.

“To be honest, when you cross the finish line the first thing you think of is that it’s a disappointment,” Langeveld said after the race.

“If I was eager to win one race it was this one. Yesterday we had to pace ourselves to win today.”

Langeveld added that he had to manage a brake problem during the race but even without that, the pace of the Honda Civic Type-R TCR compared to his Hyundai would have been too much to handle.

“The Honda was faster, it was unstoppable, plus I had an issue with my brakes,” Langeveld said.

“In the end, this was my first podium of the season after finishing P4 three times and two DNFs; then you have to be happy. The championship is my goal and it’s far from over.

“I go light to Spa and that’s really important and we have to strike for the win there. If you look at my results, one time I got pushed out by Borkovič and the other was an opportunistic move by Young – both times I ended up kicked out of the race. If that hadn’t happened, I would be leading the Championship.

“The race pace is there and the team is doing a good job. I’m really proud to be racing with Sébastien Loeb Racing and with Hyundai this year.”