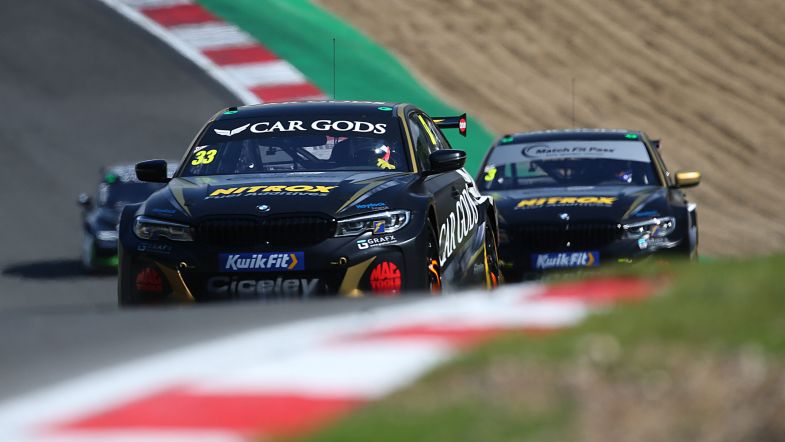 Adam Morgan ended the Brands Hatch weekend in fine style with a first BTCC win at the wheel of Ciceley Motorsport’s new BMW.

Drawn on the reverse grid pole, Morgan made the best start to lead the field into Paddock Hill Bend on lap one ahead of the Cupra of Jack Goff, with Aiden Moffat’s Infiniti up into third – Goff being forced to defend to keep the Scot at bay through the opening tour.

Morgan quickly built an advantage at the front as Goff came under pressure from Moffat, who managed to get ahead into Paddock Hill Bend on lap three. Goff however would keep the Infiniti in his sights and drew back in before reclaiming the place on the exit of Clearways on lap ten.

Morgan had already escaped up the road and he was never in serious trouble of being caught as he kept Goff at bay with relative ease to take his first victory of the season and a first win with the BMW.

Goff took his maiden podium in the Cupra with a solid second, with the battle for third coming down to a fight between Moffat and Jason Plato, who had overcome an early battle with Senna Proctor to run in fourth.

Plato left it until the final corner before trying to launch a move on Moffat but despite drawing alongside, the Scot held on to secure the place with Plato forced to settle for fourth, with Josh Cook overhauling team-mate Proctor to take fifth.

Rory Butcher was the fastest man on track in his Toyota but had to settle for seventh having kept Ash Sutton at bay, with the Infiniti man leading the standings at the end of the weekend.

Dan Lloyd and Chris Smiley rounded out the top ten, with race two winner Tom Ingram fighting hard to twelfth to remain as Sutton’s closest rival in the points.

Colin Turkington’s tough weekend ended with at least some points on the board in P14.