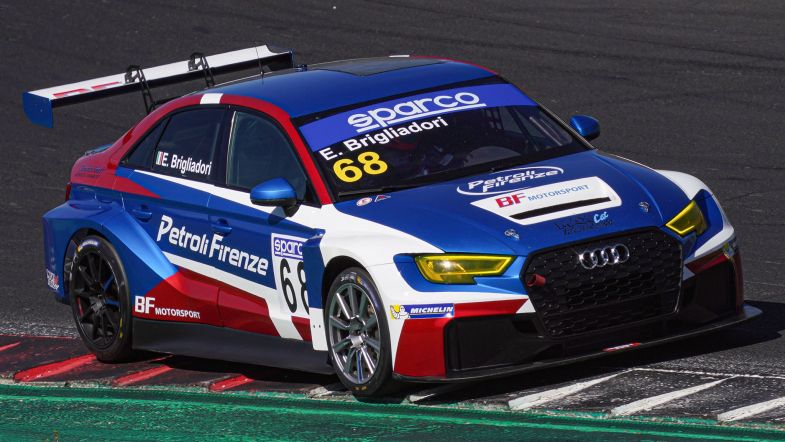 BF Motorsport’s Eric Brigliadori mastered the warm conditions to claim a dominant victory in Race 1 at Vallelunga, host of the third round of the 2021 TCR Italy season.

Brigliadori made the most of his pole position at the start to take the lead ahead of Scuderia del Girasole’s Salvatore Tavano and Antti Buri of Target Competition.

The safety car was called into action early on as Federico Paolino, driving Cupra León Competición from Scuderia del Girasole, went off and got stuck in the gravel trap.

Further behind, Volcano Motorsport’s Evgenii Leonov went wide as he was fighting with Igor Stefanovski for eighth place. The Russian driver was able to return to the track and later close the gap to the Macedonian again.

Leonov again attacked Stefanovski, braking late and going wide once more to avoid crashing with the Macedonian on lap nine. The incident was investigated by the stewards, with no further action taken.

Buri lost ground to Tavano and was again under attack from Baldan on lap ten, with Aggressive Team’s Kevin Ceccon (Hyundai i30 N TCR) joining the fight.

Marco Butti, driving a Volkswagen Golf GTI TCR of Elite Motorsport, went off the track and got stuck in the gravel trap at Turn 4 on lap 16, with double yellow flags waved at that point until the end of the race.

Brigliadori took his second victory of the season as the chequered flag fell, with Tavano and Buri completing the podium.

Ceccon overtook Baldan on the last lap to finish fourth, with Stefanovski in sixth place ahead of Leonov.

Brigliadori said after the race: “I made a race without mistakes. We started from the pole position and scored important points for the championship, so I’m happy.”

Brigliadori has extended his lead in the championship to 178 points, 15 points ahead of Buri and 24 over Tavano.