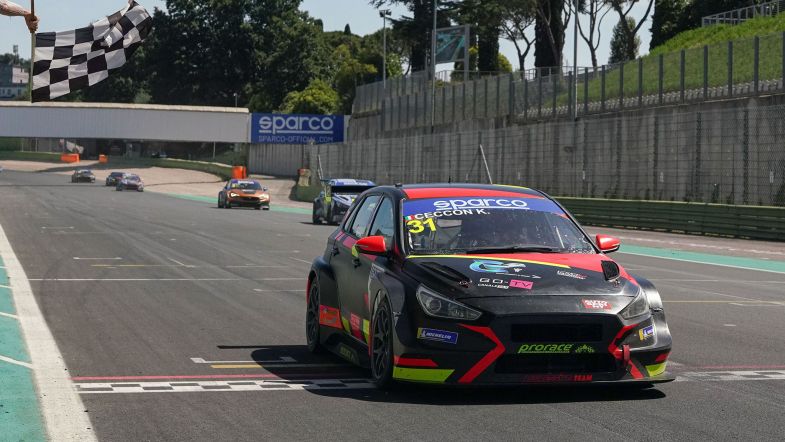 Mattias Vahtel and Ruben Volt started from the reversed grid front row with their pair of Honda Civic Type-R TCRs.

At the start, Vahtel took the lead ahead of Volt and Ceccon, with Michele Imberti of Elite Motorsport in fourth.

Hyundai driver Igor Stefanovski and Sabatino Di Mare collided on the first lap, but were able to rejoin the race. Di Mare would retire four laps later due to a technical issue.

Volt soon lost ground to leading driver Vahtel, with Imberti, Antti Buri and Salvatore Tavano catching up with Ceccon in the battle for third.

Hyundai driver Buri collided with Imberti, but the Elite Motorsport managed to stay ahead of the Finn.

Meanwhile, Race 1 winner Eric Brigliadori was gaining ground and was by lap three right behind Tavano.

Imberti made a similar mistake on the same lap, allowing Buri and Tavamno to go through, with the Elite Motorsport driver falling to sixth place.

Volt continued losing ground due to a suspected tyre issue, dropping down to ninth place within a lap and soon pulled into the pits to retire. Leonov retired three laps later, parking along the track.

Crisis hit the ALM Motorsport team when Vahtel also pitted from the lead on lap nine due to a tyre issue, leaving Ceccon as the race leader.

Stefanovski was also hit with a tyre issue on the same lap and got stuck on the gravel trap, forcing the safety car into action.

The race was restarted with two laps to go, with Ceccon leading ahead of Buri and Tavano. Brigliadori attacked and overtook Imberti for fourth place on the penultimate lap, with Target Competition driver Nicola Baldan also going through at the last corner.

Ceccon took the win as the chequered flag fell, followed by Buri and Tavano on the podium.

Baldan had overtaken Brigliadori for fourth place on the last lap with some contact, but the positions would be reverted by the stewards after the race. Imberti crossed the line in sixth position.

Ceccon said after the race: “I have a great feeling. We started from the front and we knew we had to prove ourselves. This morning we saw there was an issue with tyre wear, specially from half of the race, so I waited to see what would happened and I was able to lead the race and win.”

Brigliadori still leads the standings on 202 points, with Buri in second place, four points behind. Ceccon is next, ten points adrift, with Tavano in fourth place, 18 points behind the leading Audi driver.

The next round of the TCR Italy championship takes place at Imola on July 23-25.