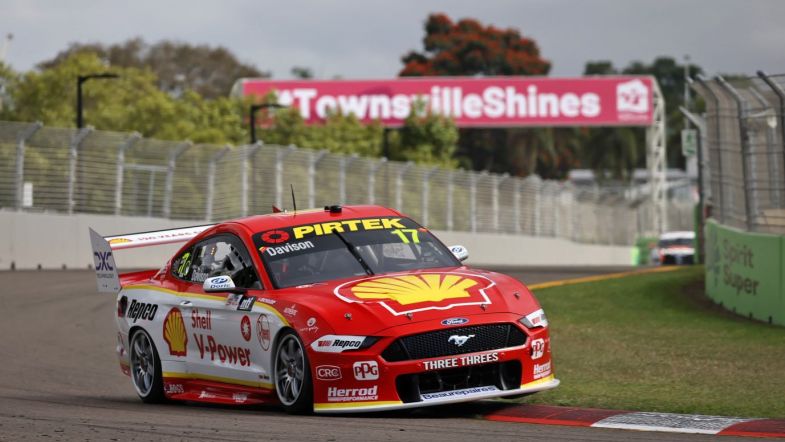 Dick Johnson Racing’s Will Davison says there are positives to take from the opening race of the Townsville 500 despite a noticeable pace deficit to the race-winning Triple Eight Race Engineering Holdens.

Davison started third on the grid for the first of the weekend’s two 250km races but fell back after a poor start, leaving team-mate Anton de Pasquale as the nearest contender to winner Shane van Gisbergen.

Although de Pasquale secured a podium finish, he was nearly 40 seconds adrift of the Kiwi at the finish and half a minute behind second-placed Jamie Whincup.

Davison had recovered to fifth but had to make a third visit to the pits after his team failed to fill the necessary fuel levels at the second stop.

“It’s gutting for the team, it was such a fine line and the guys do such a good job,” Davison told Fox Sports post-race.

“For half a millimetre or whatever it is…it’s a race in the pits and it’s gutting but that’s the way it goes.”

Davison put much of his troubles at the start down to being hung out to dry at Turn 3, which in turn left his Mustang susceptible to those behind.

Tyre performance in the late afternoon sun also played a part in the opening stages of the race before the cooler late-race temperatures produced a spirited fightback.

“I was pretty ordinary at the start so I was kicking myself on the opening lap, and then I really struggled in the early phase of the race,” Davison explained.

“Originally the start was pretty good, I just left half a gap down at [Turn] 3 and got hung out a bit and lost a few spots. And then, just really weak in the early phase of the race when it was hot, I was a bit of a sitting duck with the way the car was.

“We persevered, and that’s the annoying thing, I kept my head down and we were quite strong at the end of the stints and got ourselves back into contention and I had to pit again.

“So, some positives but certainly a lot of things to look at to improve for tomorrow.”

For de Pasquale, his podium joy was tempered by the fact that he felt his DJR Ford Mustang simply didn’t have the pace of the Red Bull Holdens in front. With no safety cars throughout the 87-lap race, the speed differential between the Red Bull Commodores and the rest was at its most obvious.

“I was in my own race and I couldn’t really see the [Red Bull] guys at the end, so we’re going to look at it and work out how we can go faster,” said de Pasquale.

“It is what it is, we’ll have a look at all the info and the time and come back tomorrow.

“Happy to get a podium, it’s my first on a street circuit. It’s special and cool.”