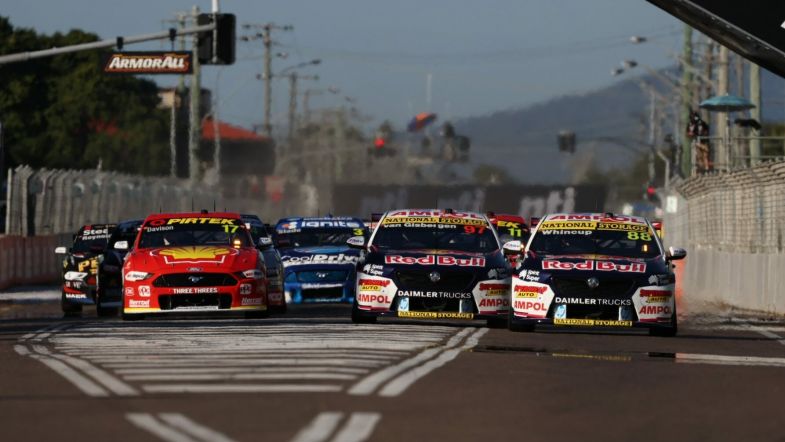 Van Gisbergen had started from pole position after the top 10 shootout but made a poor start to trail team-mate Whincup either side of the pit-stop phase.

But an overcut strategy from van Gisbergen, which maximise fresh tyres and a lighter fuel load in the closing stint allowed the Kiwi to make a crucial overtake on Whincup with 19 laps to go.

Dick Johnson Racing’s Anton de Pasquale completed the podium in third, over half a minute in arrears.

The 250km affair, shortened by a lap due to Fabian Coulthard failing to get off the line for the formation lap due to a suspected battery issue in his Team Sydney Commodore, was the first ‘fuel race’ since the opening round of the season at Bathurst, and followed the predicted two-stop strategy across the field.

Having taken pole position earlier in the day from Jamie Whincup, Shane van Gisbergen lost out to his Red Bull Ampol Racing team-mate off the line for the start proper, while Tickford’s Jame Courtney vaulted past the pair of DJR Mustangs of Anton de Pasquale and Will Davison to grab third at Turn 2.

The opening laps were frenetic for almost every driver in the lower echelons of the top 10 as Grove Kelly Racing’s David Reynolds made the most of a superb start to get past Davison at Turn 11 for sixth, while Erebus’ Brodie Kostecki duked it out with Tickford’s Cam Waters and the Team 18 Holden of Scott Pye for ninth.

Whincup, with clear air at the front, opened up a small margin over two seconds over van Gisbergen, which became a fraction over five seconds before pitting for the first time on lap 30.

The majority of the field opted to change all four tyres to maximise performance on a circuit which produced far more tyre degradation than seen all year so far, with fuel numbers and the timing of stops the real deciding factors.

Van Gisbergen stayed out some five laps longer than Whincup but took on more fuel than his team-mate which left the Kiwi momentarily behind de Pasquale in third before passing the DJR Mustang the following lap at Turn 13.

The order stayed largely the same for the duration of the next stint among the leaders, with Whincup utilising his lighter fuel load to balloon his margin at the front to just over seven seconds ahead of the second round of stops.

As expected, van Gisbergen began to take time out of Whincup – to the tune of around half a second per lap – but couldn’t quite execute the undercut to best use after his stop, rejoining three seconds behind his team-mate on exit.

But van Gisbergen, with much fresher tyres, closed on Whincup and made his move for the lead under braking for Turn 11 on lap 71.

As the two Red Bull Holdens cruised to a serene one-two, de Pasquale was equally untroubled on his way to third for DJR. After scraping into the top 10 qualifying shootout, the Victorian struggled to match the pace of the leading duo but battled past Courtney at Turn 13 in the early stages.

Like the rest of the field, he took on four new Dunlop tyres at each stop, leaving the Mustang firmly the best of the rest and comfortably ahead of Brad Jones Racing’s Nick Percat by the finish.

Percat had come under pressure from de Pasquale’s DJR team-mate Will Davison in the closing stages for fourth, but that pressure was eased after Davison was forced to make a third stop after failing to put the required 146 litres of fuel into his car.

Davison pitted with two laps remaining, relinquishing what would have been a strong fifth place.

That misfortune gave Reynolds fifth at the flag, his best finish since his podium in race three at Sandown in March, narrowly beating Team Cool Racing’s Tim Slade.

Courtney came home seventh after struggling with tyre degradation in the first stint, while Tickford team-mate Waters completed finished just ahead of the dejected Davison in eighth, with Mark Winterbottom rounding out the top 10.

It was a disappointing race for Walkinshaw Andretti United’s Chaz Mostert, who failed to make an impression after qualifying 17th. The Holden driver had made early progress to 12th but a drop-off in tyre life ensured he could only manage 14th by the finish.

The second race of the Townsville 500 is scheduled to take place tomorrow at 06:45 CEST.