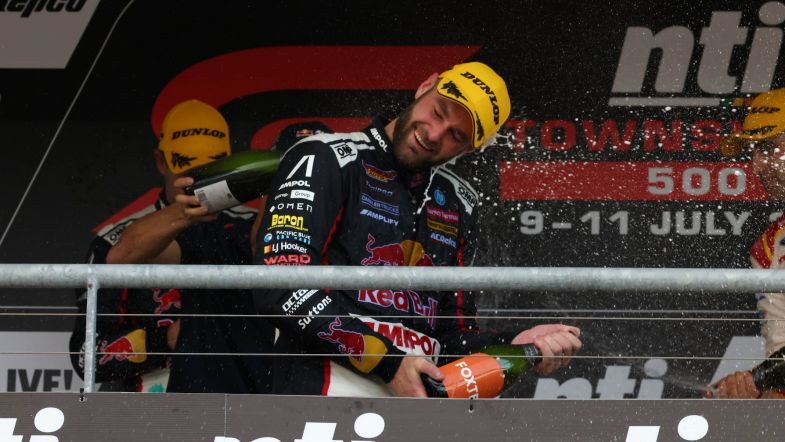 Triple Eight driver Shane van Gisbergen says he wants to be able to match his team-mate Jamie Whincup at every round after securing a dominant double victory in the Townsville 500 this weekend.

The Kiwi, who is still feeling the effects of a broken collarbone earlier in the season, picked up two wins in Queensland on a circuit which has primarily favoured Whincup over the years, but is now keen to take the next step on tracks Whincup has historically had the edge.

Both Whincup and van Gisbergen were embroiled in their own fight for the win across each race, with the latter coming out on top in an entertaining battle late on in race two.

“I knew he was going to cross me [on exit] so I just stayed on the brakes a little bit more,” van Gisbergen told Fox Sports post-race.

“It’s not good to hit each other but it was good to stop the cross.

“Personally, there are some tracks where I’ve never been able to match him at, like Darwin, Townsville we all know how good he is here and the next one is Winton. I need to match Jamie there and obviously it’s my last chance to do it before he leaves, but personally it’s been good to be able to match him at these tracks.”

Given the heat in northern Queensland this weekend, van Gisbergen’s performance across the stints was impressive, particularly as he was the only driver quicker than Whincup in the entire field during the opening 250km race.

The only blemish on van Gisbergen’s weekend came at the start of both races, something the Kiwi is keen to rectify going forward.

“I had a lot of wheelspin or whatever but then thankfully Nick [Percat] saw me coming and let me go pretty easily and got back into second, but that’s something I’ve got to fix.

“I knew Hazelwood would be not so good [at the start] but I knew if I got alongside Percat, Percat’s a really good racer and I knew he would give me some space and I could get the spot back. He’s really good to race so I trust him.

“[I felt] a lot better today, I paced myself more in the first stint and didn’t try and force Jamie and just manage my pace. I felt fine today; yesterday I was pretty beaten up today I was a lot better.”

Despite the double triumph and a healthy lead of 245 points over Whincup in the standings, van Gisbergen is not getting drawn into championship winning talk just yet.

“I don’t know what it is about our cars but they are so good and Jamie and I are just the lucky ones who get to drive them,” he added.

“245 lead, Bathurst is worth 300 points so I don’t think about the championship just yet. I just have to keep focused and in front of Jamie.”

Van Gisbergen sits pretty with 1161 points at the top of the pile, with Whincup under a weekend win behind in second.

Will Davison is net up for Dick Johnson Racing on 1291, just ahead of Chaz Mostert (Walkinshaw Andretti United).

Tickford’s Cam Waters is fifth on 1256, 405 points behind van Gisbergen, ahead of DJR’s Anton de Pasquale (641 behind) with Team 18’s Mark Winterbottom seventh.

Nick Percat, James Courtney and Will Brown round out the top ten.