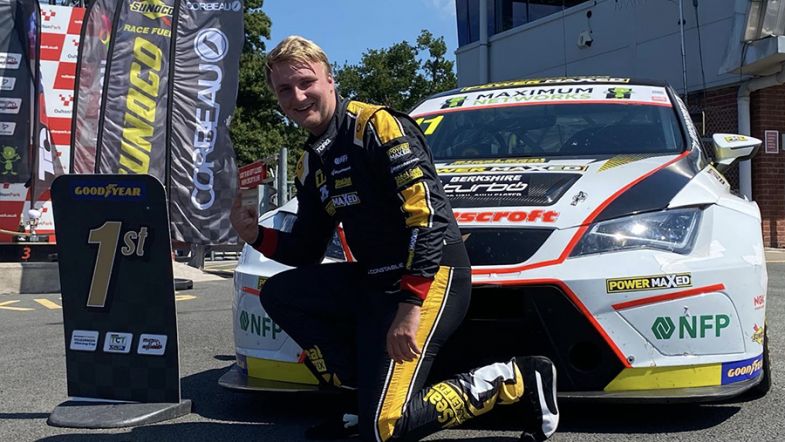 Jac Constable and Lewis Kent shared the wins in the latest rounds of the Touring Car Trophy incorporating TCR UK at Oulton Park, with the former taking his first win in the series and the latter extending his advantage in the championship standings.

Qualifying in sweltering conditions at the Cheshire circuit had seen Alex Morgan snare pole on his return to the series with Power Maxed Racing, setting a best time a quarter of a second clear of fellow Cupra driver Constable as the pair locked out the front row.

Max Hart secured third on the grid as he looked to make up ground on Lewis Kent in the standings, with the two Hyundai drivers lining up alongside each other on the grid, with the top six completed by Bradley Kent and Bruce Winfield.

Morgan led the field away at the start of the opening race and was able to build a slender advantage at the front in the early stages as Constable initially defended second spot from Hart.

However, it didn’t take long for Constable to start putting pressure on Morgan at the front and made his move for the lead at the chicane. Even with a power steering issue developing on the car, Constable was able to pull clear at the front to take the win by nearly ten seconds.

Morgan was hampered by carrying extra weight on his car and dropped back into the clutches of Hart and Bradley Kent, who had managed to get ahead of his brother at the start.

Morgan would eventually take second, helped by Bradley Kent putting pressure on Hart in the closing stages – eventually taking third spot just two laps from the end. Hart was therefore left to settle for fourth spot ahead of Lewis Kent, with Dan Kirby taking sixth having fought his way ahead of Bruce Winfield’s Cupra.

Winfield and series returnee Andy Wilmot rounded out the top eight, with the latter securing the place late on after William Butler retired late on.

Kirby would start the second race from pole position but a poor start saw Lewis Kent immediately jump into the lead – surviving an early scare when the passenger door on his Hyundai flapped open.

Kent held a slender lead over Morgan, Hart and Constable as the race developed, with Kirby having dropped back down the order to fifth spot, but Constable then dropped out of the battle when he ran off track and dropped down the order.

As Kent controlled things from the front, Hart piled the pressure on Morgan and managed to get ahead only to then make an error within half a lap that saw him lose position to the Cupra man.

Out front, Lewis Kent secured the win by more than four seconds ahead of Morgan, with Hart taking third place but points for second – with Morgan unable to score. Kirby would take fourth – albeit nearly 15 seconds behind the podium battle – with Winfield and series debutant Jack Depper rounding out the top six.

Technical issues for Bradley Kent meant he was unable to take the start and joined in when the remainder of the field had completed half a lap. A later pitstop left him a lap down at the back of the field and means he drops down to fourth in the standings as a result.

Ahead of the next round at Anglesey, Lewis Kent has extended his lead in the standings to 52 points over Hart, with Kirby now holding third spot.