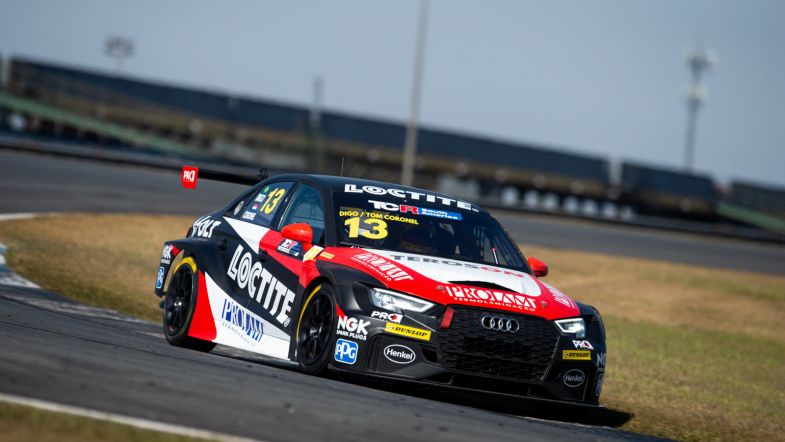 Rodirigo Baptista with co-driver and WTCR veteran Tom Coronel won an eventful TCR South America endurance race at Curitiba in Brazil from the back of the grid.

The Cobra Racing Team duo started from tenth on the grid in the eleven-car field after an electrical issue in qualifying and charged up to claim the lead with just two laps left of the one hour-race.

The second WTCR regular of the race, Esteban Guerrieri who is co-driver to Sergio Jimenez at Suqdra Martino, started the race from pole position.

But the Honda driver was overtaken by Scuderia CJ Hyundai driver Sergio Jimenez in the first corner.

The stewards however deemed that the Hyundai Elantra N TCR driver had cut the corner and handed him a drive through penalty.

This handed the lead back to Honda driver Guerrieri, with W2 Racing driver Valdeno Brito in second place and Rodirigo Baptista in third, fighting his way up through the order early on.

Disaster struck for Guerrieri on lap 12 as he suffered a front-left puncture. They managed to get back out on track with a new tyre, only to retire later with a broken driveshaft.

The safety car was called into action on lap 15 as Scuderia CJ Hyundai driver Giovani Girotto stopped on track with a front-right puncture.

Alfa Romeo driver Roy Block also stopped on track during the same safety car period due to a puncture.

The race resumed on lap 21, as the leading duo of Brito and Rodirigo Baptista pitted to hand over to Raphael Reis and Coronel respectively.

Coronel then closed in on leading driver Reis, making the move with just two laps left. Disaster struck for Reis who suffered a front-left puncture when trying to defend, dropping down to fourth position.

This promoted Beto Monteiro to second with the PropCar Racing Alfa Romeo and Casagrande/Vance crossing the finishing line in third.

The joy was short lived for Casagrande/Vance as the duo were handed a 20-second penalty after the race for “irregularities during the pit stop”, promoting Reis/Brito to third.

The Squadra Martino duo Chorne/Aizza finished fifth, with championship leader Pepe Oriola in sixth, a full lap behind the winners – having suffered a puncture during the race.

Oriola heads the standings on 75 points, seven points ahead of Rodirigo Baptista, while Reis is third on 54 points.

The next TCR South America round will be held at Velopark on August 28-29.