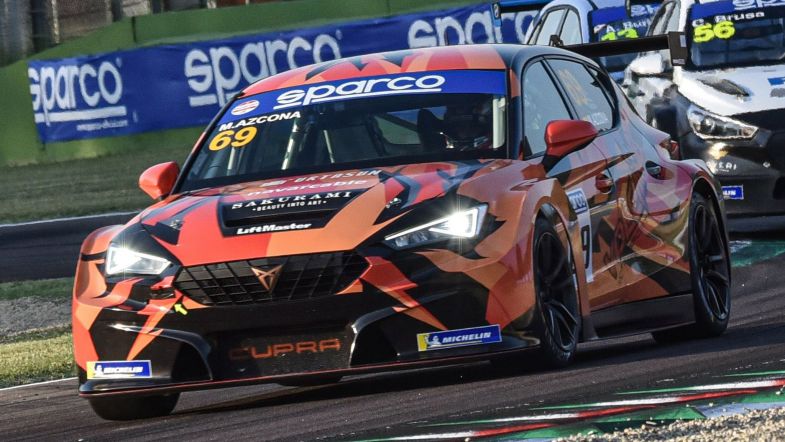 Ruben came soon under fire from Azcon as he made up ground from eighth on the grid, and the Spaniard overtook the Estonian for third place at Tamburello on lap two.

Azcona repeated the move on Baldan to take second place at the same point a lap later, with the Italian also losing to Ruben.

Baldan then came under attack from Akk Stefanovski’s Igor Stefanovski in his Hyundai i30 N TCR on lap four, as Azcona caught up with Buri, overtaking the Finn for the lead on the same lap at Tamburello.

Saturday’s winner Kevin Ceccon was also on a recovery drive, up to fifth place on lap five and closing the gap to Baldan. Right behind, BF Motorsport’s Eric Brigliadori overtook Stefanovski for sixth place, with the Macedonian tagged by Volcano Motorsport’s Evgenii Leonov, going wide at Rivazza and falling down the order.

Ceccon overtook Baldan for fourth place on lap seven, as Brigliadori and Leonov caught up with the pair, with Baldan suffering damage after a contact with Ceccon. The Aggressive Team driver would have to retire to the pits with damage a lap later.

Leonov overtook Brigliadori for fifth place on the main straight on lap nine, with the Russian putting the pressure on Baldan.

Ettore Carminati saw the opportunity to get ahead, with the three drivers arriving three-wide at Tamburello. Brigliadori, sandwiched between Tavano and Carminati, collided with the Hyundai driver, with the Audi launching against the barriers. The safety car came into action.

The race was restarted with two laps to go, with Azcona leading ahead of Buri and Ruben. Tavano went wide at Tamburello after a contact with K2 Engine’s Dusan Kouril, with Baldan losing also losing out before reclaiming his position.

At the chequered flag, Azcona took his second victory of the season, with Buri and Ruben completing the podium. Leonov was fourth, ahead of Baldan, who managed to fend off Kouril’s attacks.

“I’m very happy to finish the weekend like this, it’s the best feeling, even starting from eighth due to the inverted grid,” said Azcona after the race. “We had some hard fights and a contact with Stefanovski. Once I overtook Buri I was careful with the kerbs to look after the tyres, but we had a brutal pace, so it’s fantastic.”

After the fourth round of the season, Buri leads the championship with 260 points, 19 ahead of Ceccon and 31 over Baldan.

The next round of the TCR Italy takes place again at Imola, from the 3rd to the 5th of September.