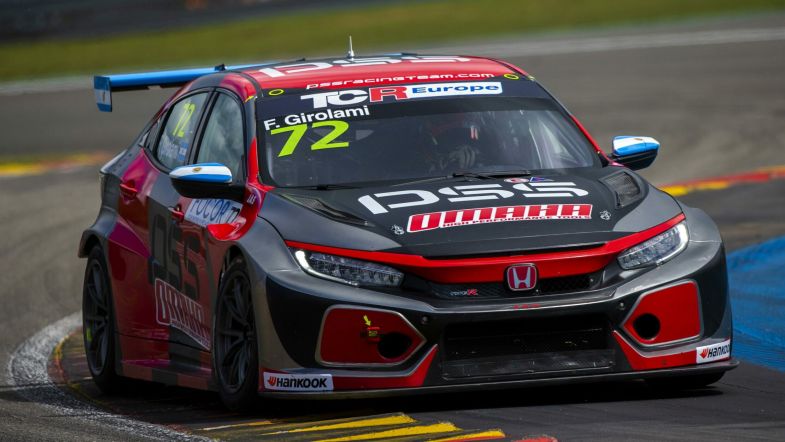 PSS Racing’s Franco Girolami says he is targeting “at least the top ten” in Friday’s TCR Europe series qualifying if he is to maintain his points advantage at Spa-Francorchamps.

Girolami, who leads the points by eleven points over Volcano Motorsport’s Mikel Azcona, topped the opening practice session of the weekend with a late lap and ended the second 30-minute session third fastest.

But despite the strong showing in practice, Girolami is wary that the Honda Civic Type-R’s weaknesses around the 7.004km circuit will make for a tougher time come qualifying and the first race.

Speaking to TouringCarTimes, Girolami said: “I’m very happy with the car and the team is improving the car step-by-step.

“To be P1 and P3 today has been good of course, but we know that things can change a lot in qualifying. And the other cars are quicker in sectors one and three, which we are not.

“We need to work on improving the set-up for these sectors, because this is not really a good circuit for Honda.”

The Honda is down on overall top speed compared to the more aerodynamic cars such as the Hyundai Elantra, the Peugeot 308TCR and the Audi RS 3 LMS, leaving Girolami to pin his hopes on the reversed-grid second race on Saturday for the biggest haul of points.

“Our car is very good in the second sector [which is], tight, but in the sector one, we struggle so much because it is uphill and we have not so much speed compared to the others.

“The main thing is to score points in the races and not DNF. We have not DNF’d at all this year so far, so top 10 in qualifying is crucial and then we need to finish the races too.”

Girolami is one of six winners in as many races this season and understands the importance of consistent results, particularly with his closest title rival Azcona showing equally fast pace in practice on a circuit he took two dominant wins last year.

Girolami’s Honda brand mate Jack Young, who was fastest in the second session, shared the Argentinian’s viewpoint and believes with 60kg of added compensation weight, pole is “not going to happen” on Friday.

“We spent much of FP1 just getting up to speed with the set-up really and then changed a bunch of things for the second session,” Young told TouringCarTimes.

“It’s only practice but the car felt really good and we’re happy with the changes we made.

“But I think the chances of me getting pole, with 60kg is pretty much impossible, it’s not going to happen if we’re being honest.”