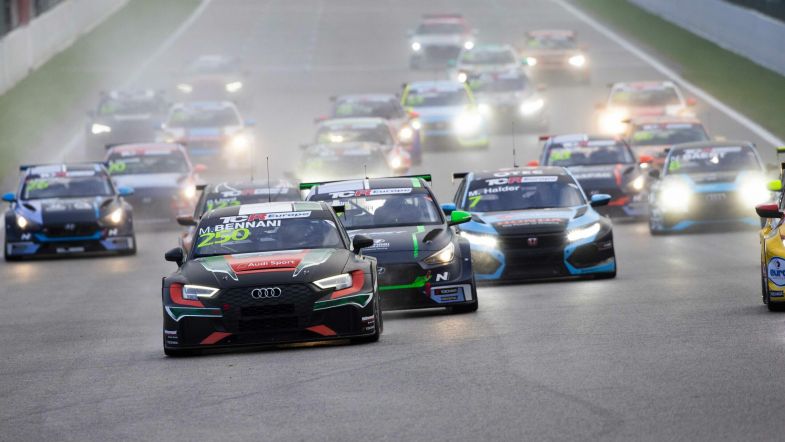 All to play for as TCR Europe heads to Spa-Francorchamps

The 2021 TCR Europe series reaches its halfway point at Spa-Francorchamps this weekend, with the title battle set to resume as Volcano Motorsport’s Mikel Azcona returns after missing the last round.

Having skipped Zandvoort due to his PURE ETCR commitments, Azcona relinquished his points lead to PSS Racing Honda Civic Type-R TCR driver Franco Girolami, but the Spaniard remains just eleven points adrift of the top of the table.

Azcona won the opening round of the season at the Slovakiaring and took a clean sweep of wins at Spa last year, dominating the weekend and producing a sensational drive from 13th on the grid to come out on top each time.

Clairet is tied on points with Comtoyou Racing’s Tom Coronel, while the latter’s Audi RS 3 LMS team-mate – and reigning champion – Mehdi Bennani is another six behind.

Such is the openness of the series so far this year, six different drivers have won the opening six races.

As well as the return of Azcona to the series this weekend, Dániel Nagy also features on the entry list in his Zengo Motorsport Cupra León Competición.

The Hungarian, ever a popular figure within the paddock, had been set to make his return to action at Zandvoort, having been forced to pull out of the Paul Ricard round due to sponsorship issues, but failed to turn out.

Both Nagy and Azcona will hope that the Cupra has a better weekend at Spa than it did at Zandvoort. The León Competición struggled for pace all weekend and picked up a total of just seven points across the two races.

The big winners in the Netherlands were Hyundai, in the form of Sébastien Loeb Racing, and Audi with Comtoyou Racing. The former collected 96 points but Audi, courtesy of Coronel’s race one victory, added 115 points to move closer to SLR in the Teams’ standings.

Heading the charge for Hyundai are its regular drivers Bennani, Felice Jelmini, Niels Langeveld and Sami Taoufik, while Comtoyou have local driver Nicolas Baert alongside Coronel and Dušan Borković.

Running as a support category for the Spa 24 Hours, the timetable is slightly different to a normal TCR Europe weekend, with the action kicking off with free practice on Thursday afternoon at 12:30 CEST. Practice two then takes place later in the day at 16:55 CEST, both sessions lasting 30 minutes.