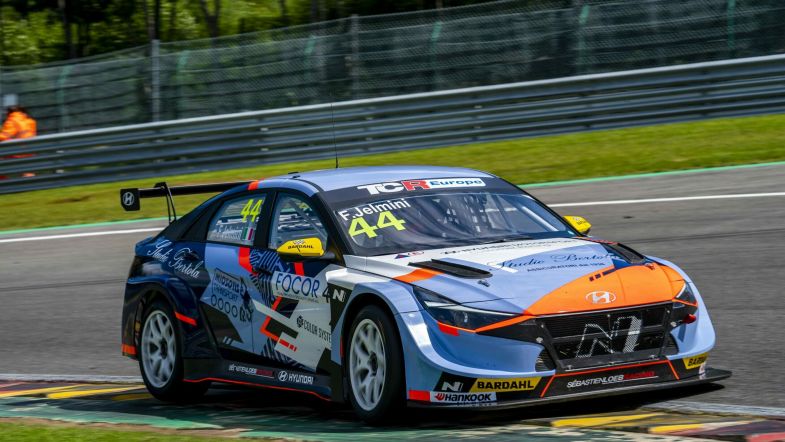 Sébastien Loeb Racing’s Felice Jelmini will start from pole position for the opening TCR Europe series race of the weekend at Spa-Francorchamps, leading Hyundai clean-sweep of the top three.

The Italian posted a time of 2:30.152 to beat team-mate Mehdi Bennani by four-tenths of a second, while Mat’o Homola ended up third in his older-generation Hyundai i30 N TCR for Janík Motorsport.

Klim Gavrilov was tenth fastest in Q2 and will therefore start the reversed-grid Race 2 from pole, alongside the Brutal Fish Racing Honda Civic Type-R TCR of Isidro Callejas.

FP1 pacesetter Franco Girolami set an initial benchmark of 2:31.665 in his PSS Racing Honda before being quickly usurped by the fellow Honda of Brutal Fish Racing’s Callejas.

Callejas’s effort was something of a diamond in the rough for the Brutal Fish team as the sister Civic Type-R of Jack Young, who ended FP2 fastest, went off at the exit of Les Combes early on.

The Northern Irishman navigated his way out of the tyre barrier and carried around the lap at reduced pace, but eventually pulled off at the exit of Blanchimont and failed to set a time.

Barring subsequent penalties, he will start both of this weekend’s races from 20th on the grid.

The third Brutal Fish Racing Honda of team owner Martin Ryba also endured a difficult session, spinning the car at the Fagnes chicane before missing out on a place in the top 12; he starts 14th for each race.

Sébastien Loeb Racing’s Felice Jelmini ended the first qualifying runs as the fastest driver, having set the best middle sector, but he was soon beaten by Bennani’s second proper run.

Bennani’s team-mate Sami Taoufik got the closest to the defending champion, ending up just seven-thousandths of a second in arrears at the flag.

A flurry of improvements in the final laps made sure the order changed frequently, with VRC-Team’s Klim Gavrilov emerging as the best Audi RS 3 LMS in fourth, ahead of Callejas and Teddy Clairet (Team Clairet Sport Peugeot 308TCR).

Bennani and Taoufik continued their Q1 pace in the opening laps of the second segment of qualifying, with the former opening up a margin of three-tenths after a lap of 2:30.571.

Taoufik looked to improve his time but ran too deep at the Bus Stop chicane at the end of the lap.

The superiority of the Elantra N was further demonstrated as Jelmini then set the fastest time of 2:30.152, to go four-tenths quicker than Bennani, while Homola improved to third.

Jelmini wasn’t beaten thereafter, with Azcona setting the fourth-quickest time, some seven-tenths behind the pole time.

The best of the Audis was local driver Nicolas Baert for Comtoyou Racing in sixth, with Girolami seventh.

Teddy Clairet was eighth in his Team Clairet Sport Peugeot, ahead of Callejas and Gavrilov.