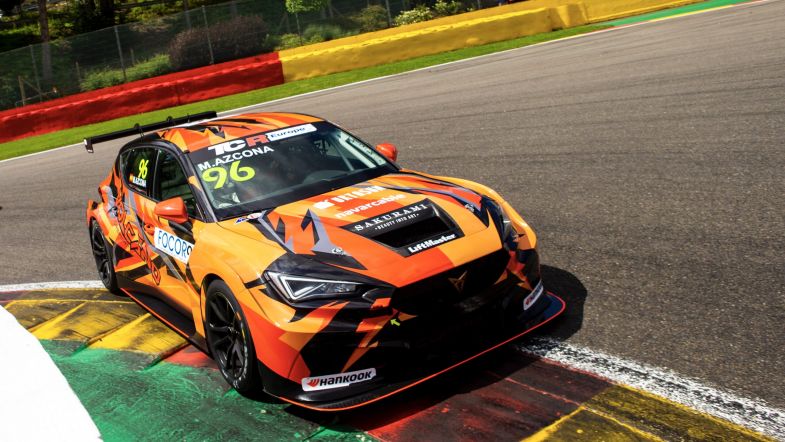 The 2018 champion started third on the grid but made a strong start to leapfrog polesitter Felice Jelmini and Mehdi Bennani by the time the field got to Eau Rouge for the first time.

Once in the lead, Azcona maintained a steady gap over Bennani, who never really looked like getting close to the Cupra León Competición driver, who came home 2.605s clear at the flag.

Having bogged down off the line, Jelmini was quickly swamped by Bennani and then Azcona by La Source, before Azcona carried better momentum to seize the lead on the inside of Eau Rouge.

Further round the first lap, Brutal Fish Racing’s Martin Ryba tagged the back of Klim Gavrilov’s Audi RS 3 LMS at Bruxelles. The latter was then hit by the Hyundai i30 N TCR of Jachym Galaš and Gavrilov, while Sylvain Pussier Team Clairet Sport Cupra León speared into the inside wall in avoidance.

The safety car was deployed, and Azcona duly maintained his lead upon the resumption of action from Bennani.

Bennani had kept Azcona in sight for the duration of the 10-lap race but could not get close enough to make a move on the race-winning Cupra.

While the top quartet enjoyed a largely processional race, the action was anything but further behind.

After spinning in qualifying, Brutal Fish Racing’s Jack Young was in the wars again after being hit by the Cupra of Evgenii Leonov approaching Fagnes. Leonov had run wide at Pouhon and, upon returning to the track, cut off the Honda Civic Type-R of Young with inevitable contact made.

Leonov was also involved in contact with another Brutal Fish Honda in the closing stages, this time running into the back of Ryba, leaving the Slovakian to repeat his qualifying spin at Fagnes.

Young’s day didn’t get any better either as the Northern Irishman was handed a drivethrough penalty for overtaking under safety car conditions.

There was, however, some respite for the team as teenager Isidro Callejas came home ninth by the flag.

The star performance of the race arguably came from PSS Racing’s Franco Girolami who suffered with a tyre rub in the closing stages and then running through the gravel trap on the final lap. Nevertheless, he managed to cling onto fifth place at the finish, ahead of Comtoyou Racing’s Nicolas Baert.

Race 2 at Spa-Francorchamps is scheduled to take place on Saturday at 11:20 CEST.