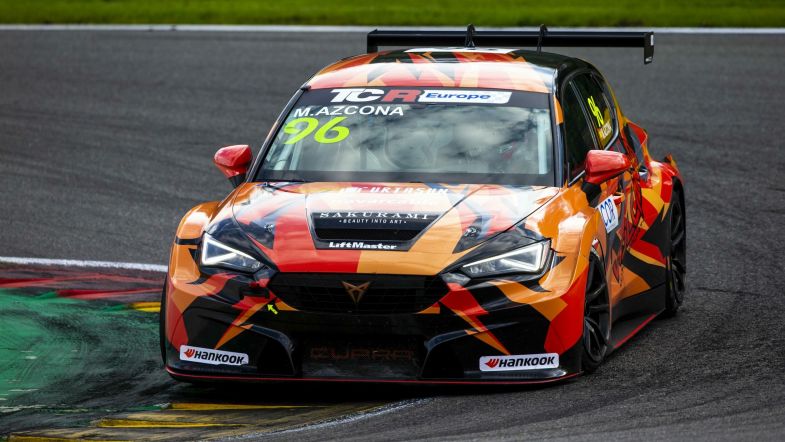 Race 1 winner at Spa-Francorchamps Mikel Azcona says that he was largely “comfortable” ahead of nearest rival Mehdi Bennani en route to his second triumph of the 2021 season.

Although Azcona never had more than two seconds margin throughout the ten-lap affair, the 2018 champion admitted he didn’t feel pressurised by the Sébastien Loeb Racing Hyundai driver.

Azcona started fourth on the grid and make a sensational start to jump both the Janík Motorsport Hyundai i30 N TCR of Mat’o Homola and the pole-sitting Hyundai Elantra of Felice Jelmini before passing Jelmini’s SLR team-mate Bennani at Eau Rouge.

“In qualifying, I did my best but I could only take P4 but then the race was amazing,” said Azcona post-race.

“The start was the key. I did a really good launch and then I could overtake the three Hyundai cars in front so that was really good.

“I also did a good restart after the safety car and I managed to keep ahead of Bennani… from that point onwards I was pushing really hard but at the same time managing the gap to Bennani and it was quite easy because of that gap.”

While Bennani was the only driver to match Azcona for race pace, the Moroccan defending champion never got close enough to seriously challenge the Cupra León Competición in front.

Knowing this, Azcona said that he felt “comfortable” as he closed out the race win, his second of the year and becoming the first driver to win more than one race.

“We finished P1, so got some really good points for the championship,” Azcona continued.

“It was comfortable for me because when you have Bennani behind you, it’s always difficult but I had a comfortable race, very clean and relaxed at the same time.”

Meanwhile, Jelmini was left to rue a poor start from pole position, having later struggled with the handling of his Elantra N.

“For sure I’m not happy with the final result because I started from the pole so the main goal was to keep that position,” he said.

“I overheated the front tyres; I tried to cool them down but I suffered a lot from understeer.

“I did a very bad start – maybe the limiter was set too low, but when I released the button the RPM was quite low. Okay, it was my fault as well, so I know I have to improve.”