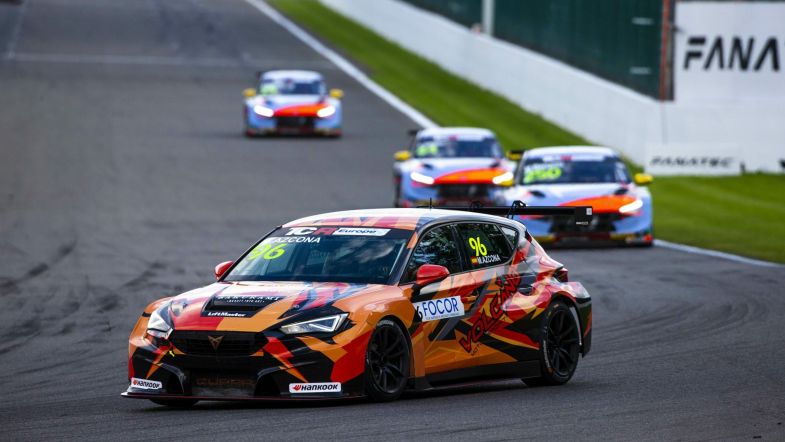 Mikel Azcona produced another masterclass to take his second TCR Europe victory of the Spa-Francorchamps of the weekend in a rain-affected Race 2.

Replicating the strategy he used to win in the second race last year, Azcona opted to put on slick tyres on the front of his Volcano Motorsport Cupra León Competición and wet tyres on the rear.

It proved to be a wise decision as he romped to victory over Janík Motorsport’s Mat’o Homola, whose inspired full slick tyre choice enabled him to get the better of Team Clairet Sport’s Teddy Clairet on the final lap.

A light but persistent rain shower jkust 15 miniutes before the race hit the circuit, which forced not only a safety car start but also team into frantic action as they determined what tyre combinations to use.

Polesitter Klim Gavrilov took the bold decision to put on wet tyres all-round while Homola elected to go the opposite direction with full slicks. The majority of the field, however, went for a mix of wets and slicks.

Gavrilov led the opening tour after two laps behind the safety car before bailing for slicks, allowing Teddy Clairet – who had overtaken front-row starter Isidro Callejas on the first lap – to assume the lead.

Azcona had worked his way up to fourth by the third racing lap of ten by passing PSS Racing’s Franco Girolami, Comtoyou Racing’s Nicolas Baert and Callejas, and soon had Clairet in his sights.

By the sixth lap, Azcona had the lead, seizing it from Clairet around the outside of the Bus Stop chicane and duly began to pull away despite a valiant fightback attempt from Clairet at La Source.

Azcona then was largely unchallenged for the remainder of the race, while Clairet had to defend heavily from the charging Homola late in the race, as his Peugeot 308TCR struggled with decreasing grip.

That allowed Homola, who had been lapping as much as a second a-lap quicker than the leading duo, to sneak by on the inside of Fagnes to grab a remarkable second in the older-generation Hyundai i30 N TCR.

Clairet had to make do with third in the end, but the Peugeot 308TCR driver produced an equally impressive drive on the same slick-front and wet-rear tyre combination as Azcona.

Callejas finished fourth, some 12 seconds in arrears and just ahead of the Sébastien Loeb Racing Hyundai Elantra N of Niels Langeveld. Their battle was close but nothing compared to the epic three-car scrap between Sami Taoufik, Franco Girolami and Nicolas Baert which settled sixth place at the flag.

The trio were inseparable throughout and embraced three-wide action down the Kemmel Straight on numerous occasions. Baert initially got the better of Girolami by sliding his Comtoyou Racig Audi RS 3 LMS through the middle into Les Combes and then had to suffer the same fate the following lap as Girolami got back ahead.

Baert tried again on the final lap, but Girolami held on firm to claim seventh, with Taoufik having made the most of the squabbling to nip ahead of both for sixth.

Azcona’s second double victory at Spa-Francorchamps – having taken both wins last year – has given the Volcano Motorsport driver a comfortable lead in the championship standings heading into the next round of the season at the Nürburgring on the opening weekend of September. He now holds a 30-point lead over Girolami, having arrived in Belgium trailing by 11.