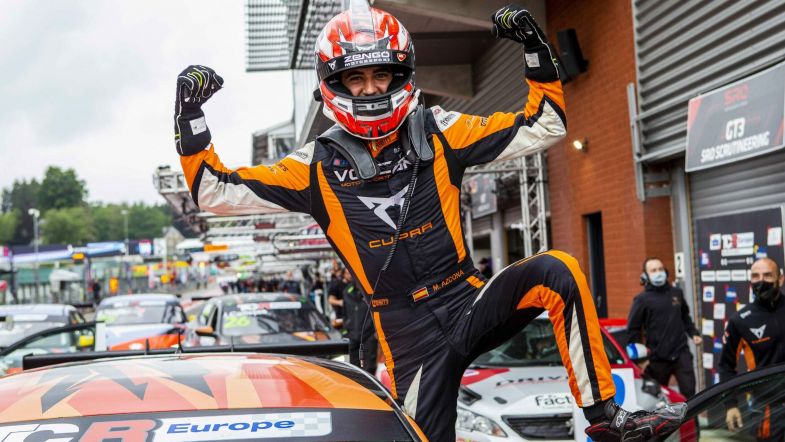 Mikel Azcona says he will put all of his efforts into the remainder of the TCR Europe season as he goes in search of a second title following a double victory a Spa-Francorchamps.

The Volcano Motorsport Cupra driver repeated his 2020 form by taking the win in each of the two races, and now has returned to the top of the standings heading into the next round at the Nürburgring in September.

Key to Azcona’s victory in Race 2, much like last year, was the decision to mix the slick and wet weather tyres to his León Competición before the start of the race which began under a rain shower.

“I love this track and the conditions were, of course, very challenging. It was a great decision from my team to put the slicks on the front and the wets on the rear because it gave me a lot of confidence.

“But from the third lap, I think it would probably have been better to have slicks front and rear, but there was nothing really we could do to be honest.”

Azcona quickly opened up a lead on Clairet once he made his move at the Bus Stop chicane on the sixth lap but knew that he would need to continue pushing in variable conditions in order to secure the win.

“I was already P1 at the time and I knew I had a little gap. So, I pushed like hell to build more of a gap and then I looked after the tyres more in the last laps.

“Basically, Teddy went too wide at Blanchimont and I could close to the back of him and overtake him. I went to the left, and it was my decision to stay there, and it worked. He was very respectful, and it was a clean move I think.

“After that, I pushed really hard for two or three laps because I knew I was very fast in sector two, so this was important to build a gap. I felt the car was sliding a lot after that and it was tricky to drive, the car was moving a lot.

“But with the gap, it was okay, and I could take it more easy to the finish.”

Now with a 30-point lead in the championship over PSS Racing’s Franco Girolami, Azcona has a second title in his sights, something he is focusing on claiming after the summer break.

“It’s been a great weekend for the championship, of course the goal is to do the rest of the races and win the championship. We’re doing a great job and we need to keep up this effort for the remainder of the year.

“We had a great start to the season, even though we didn’t do the Zandvoort weekend, but for sure we are happy with everything, the car works so well, and we are getting better as a team, so we look forward to the next round.”

Leaving Belgium, Azcona sits on 230 points, with Girolami on 200. Sébastien Loeb Racing’s Mehdi Bennani is in third on 183 points, 20 clear of team-mate Niels Langeveld, while Comtoyou Racing pairing Tom Coronel and Nicolas Baert are on 154 and 148 points respectively.