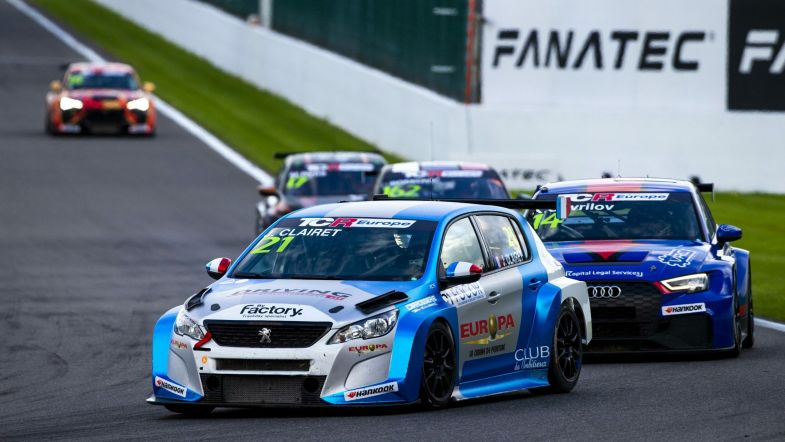 Team Clairet Sport’s Teddy Clairet says he can take the positives out of the second TCR Europe race of the weekend at Spa-Francorchamps, despite losing out on second place to Mat’o Homola on the final lap.

The Peugeot 308TCR driver started third on the grid and led once polesitter Klim Gavrilov pitted for slick tyres but lost out to eventual race winner Mikel Azcona on the sixth lap of ten.

Struggling for grip after deploying the same front-slick, rear-wet combination as Azcona, Clairet then fell into the clutches of the full-slick Homola and had to cede the place at Stavelot on the last lap.

“In the end, it was impossible to hold Mat’o who was on slicks; I tried but it was not enough,” Clairet said.

“Still, I’m happy to finish third. It’s another podium and in this kind of race, anything can happen. It’s good to take the points and finish on the podium, so I’m happy with that.”

Clairet also admitted that even the conservative approach of a mixed tyre selection had been something of a gamble pre-race, given how unpredictable the weather can be at Spa-Francorchamps.

But once he noticed Azcona had a similar strategy, the Frenchman decided to focus on his own race instead of worrying about the outcome.

“It’s always difficult when it begins to rain when you are on the starting grid. We made what I thought was a good tyre choice. Mikel was a bit faster than me and so I didn’t want to fight too much with him because I didn’t want to lose too much time.

“When I saw Gavrilov was on rain tyres and on the first laps when we were behind the safety car, I knew it would be difficult for him because most of the circuit was dry, so I wasn’t surprised when I saw him go into the pits.

“I was a bit worried that my tyres would be okay, but everyone around me was the same, so I said to myself ‘we will see where we are at the end’ and it was okay.”